Home > News > Blog > Why use “Wave” in electrochemical instrumentation names?

Why use “Wave” in electrochemical instrumentation names?

What is in a name?  The word wave evokes stimulating visions of rushing water, powerful energy, and sheer beauty.  A wave can also refer to a new social or technology trend.  To a scientist, a wave might bring back memories from physics, learning about electromagnetic waves or understanding trigonometric functions.  At Pine Research Instrumentation, a wave means all that and more. 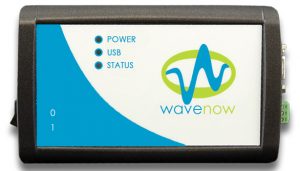 The WaveNow was one of the first small, USB interfaced, fully software-controlled potentiostats commercially available.  Researchers have gradually moved away from using the front-panel control on potentiostats and acquiring data on chart recorders.  Submitting a manuscript for publication requires digital submission, and it is significantly easier to prepare a manuscript with digitized data.  Pine Research Instrumentation made big waves with the release of their AfterMath software, included with the purchase of a WaveNow (and all their potentiostats, for that matter).  Unlike most instrumentation control software available at the time, AfterMath was written to boldly combine instrument control, data acquisition, data manipulation and analysis, and organization in one application.  Typically, each of these actions required a different software application (and some brands still do!).  Pine Research Instrumentation changed the potentiostat/software landscape by delivering a single software solution and has continued to improve the software ever since.

The physical size was also a major factor in developing the WaveNow.  A quick poll of principal investigators (PI) revealed that one of the most valuable commodities in their research laboratory was space.  A successful PI with numerous research grants, a sizable team of researchers, and plenty of instrumentation expressed concern over having sufficient space for their team to conduct research.  With a small form factor, the WaveNow design addressed space concerns by having a footprint of only 165×100×29 mm.  The WaveNow design allowed labs to integrate electrochemical instrumentation into an already cramped benchtop, freeing up space to integrate additional products such as a UV-Vis spectrometer for spectroelectrochemistry.

Pine Research Instrumentation continued to tailor the WaveNow to the needs of the researcher by developing a series of WaveNow potentiostats including the WaveNano, a low current version, and the WaveNowxv, with an extended voltage range.  Today the WaveNow can now be found in laboratories around the world.

If you haven’t already, we invite you to contact us!  We enjoy hearing how our products may be helpful to you and products you need but we do not have on our website.  You can also follow us on Facebook, Twitter, YouTube, and LinkedIn.  Keep an eye on our news feed for more updates and useful articles.  Catch the wave with Pine Research Instrumentation!