Back to Corrosion Back to Applications Back to Knowledgebase Home

Linear Polarization Resistance (LPR) measurements and the calculation of corrosion rate from LPR data.  Implementation of LPR measurements in AfterMath

AfterMath Downloads is also described.
Back To Top

(units of Ω⋅cm2), can be used to calculate a corrosion rate.

can be calculated or experimentally-determined.  To calculate

, the Stern-Geary equation can be used (see Equation 1), where

is the proportionality constant for the particular corrosion system and

is the corrosion current density (units of µA/cm2).

Linear Polarization Resistance (LPR) can be utilized.  In an LPR measurement, the potential

is measured about the free corrosion potential

.  The slope of the potential-current density curve over a small potential window (typically <20 mV) is then calculated and is equivalent to

is used to calculate a corrosion rate for the system under study.  Depending on a researcher’s analytical needs, determination of

may be sufficient, as the polarization resistance is directly proportional to the corrosion current density, as shown in Equation 3.
With additional information about the system under study,

can be used to calculate the corrosion current and corrosion rate.  To determine

) must first be empirically determined.  An open circuit potential (OCP)

Open Circuit Potential (OCP) measurement can be used to determine

easily for any given system.  AfterMath

with a linear sweep around

.  Detailed descriptions of performing LPR experiments in AfterMath to determine

are provided later in this document.
Back To Top

values range from 60 mV to infinity, the latter corresponding to diffusion control by a dissolved oxidizer.

Faraday’s Law relates the charge transferred during an electrochemical process to the amount of material undergoing that process.  Consider the corrosion half-reaction of some species,

(see Equation 5).
The change in mass of

relates to the current flow in Equation 5.  The relationship is given by Faraday’s Law, where

is the charge (in units of C) that arises from the electrolytic reaction in Equation 5,

is the number of electrons transferred per reaction,

is the number of moles of

that have gone through the reaction (see Equation 6).  Faraday’s Law is the foundation for converting corrosion current density to mass loss rates or penetrations rates.
The charge

can be defined in terms of electrical current, where

is the current (in units of A) and

(see Equation 7).
By combining Equations 6 and 7 and rearranging, the number of moles of material,

, reacting (corroding) over a given time can be determined (see Equation 8).  Manipulating Faraday’s Law into this form gives the underlying equation for determining corrosion rates.
Back To Top

, is a term used in corrosion calculations.  Equivalent weight for pure elements is the ratio of the atomic weight,

, to the number of electrons transferred,

, in the corrosion electrolysis step (see Equation 9).
As an example, consider the two electron oxidation of iron:
Since

ASTM &nbspStandard Practice for Calculation of Corrosion Rates and Related Information from Electrochemical Measurements.  American Society for Testing and Materials (ASTM), 2015. This discussion for equivalent weight applies only to uniform corrosion; i.e., an oxidation process that is uniform across the electrode, and is not inclusive of other types of localized corrosion such as pitting corrosion.
Back To Top

, can be calculated using

and a modified form of Faraday’s Law.  Corrosion rate is usually expressed in one of two ways: average penetration rate or mass loss rate.
Back To Top

To calculate the corrosion rate in terms of the penetration rate,

set forth in Equations 4 and 9, respectively, metal density,

(in units of g/cm3), and a proportionality constant,

, are needed (see Equation 12).  The penetration rate can be calculated in several useful units given the correct constant of proportionality,

ASTM &nbspStandard Practice for Calculation of Corrosion Rates and Related Information from Electrochemical Measurements.  American Society for Testing and Materials (ASTM), 2015.
Back To Top

To calculate the corrosion rate in terms of mass loss rate,

, another constant of proportionality,

, is introduced and combined with the definitions of

set forth in Equations 4 and 9, respectively (see Equation 13).  The mass loss rate can be calculated in several useful units given the correct constant of proportionality,

ASTM &nbspStandard Practice for Calculation of Corrosion Rates and Related Information from Electrochemical Measurements.  American Society for Testing and Materials (ASTM), 2015.
Back To Top

Linear Polarization Resistance (LPR) an OCP measurement is executed prior to the LPR sweep to determine Ecorr; thus, it is not necessary to perform a separate OCP measurement to determine Ecorr.  However, evaluating Ecorr with a standalone OCP experiment before beginning LPR measurements gives insights into the stability of the system and the value of its corrosion potential.
Making the OCP measurement in AfterMath is described below.  Run the measurement for a long enough period as to find a steady state potential.  The slope of the OCP vs. time plot will be close to zero (units of mV/s).  The time to achieve steady state depends on the electrochemical system, but typically requires a few minutes.
Back To Top

Running an OCP measurement in AfterMath is accomplished through executing the following steps: 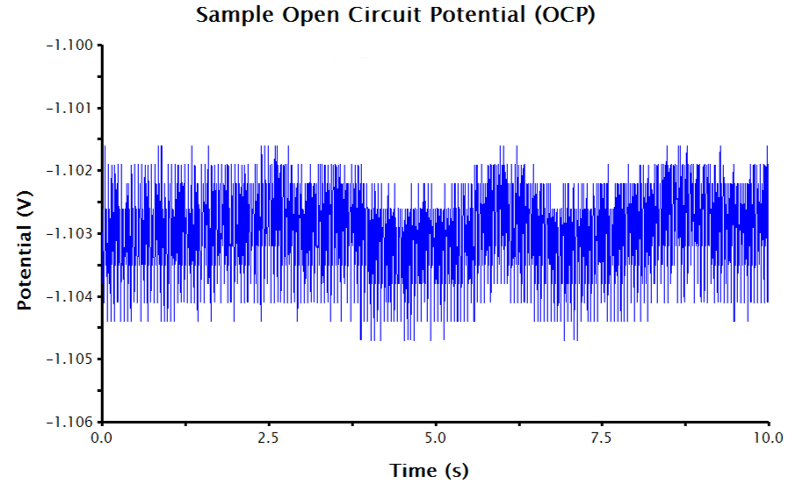 Since an OCP measurement is sensing very small changes to potential over time, the auto-scaled y-axis often displays an extremely small potential window, disproportionately emphasizing the noise in the displayed data.  The y-axis can be adjusted to improve the appearance of the data (see Figure 2).  To adjust the scale of the y-axis: 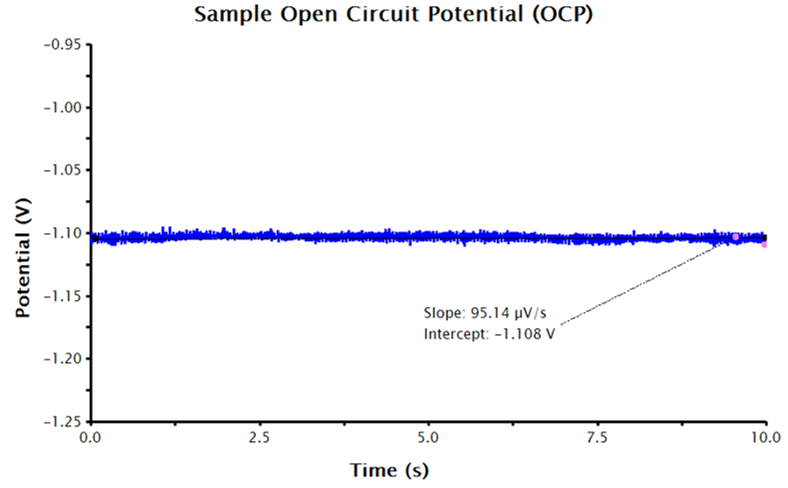 Figure 2. OCP Data in AfterMath with the Potential Axis Scaled and Fitted with a Best-Fit Line

With an axes-adjusted OCP plot, the tools built into AfterMath can be used to find the baseline (also called the best-fit regression line) through a segment of the steady state OCP data.
Back To Top

4.1Setup of an LPR Measurement

To run an LPR measurement in AfterMath, the following steps should be taken:
Table 3. Common Parameters for LPR Measurements
AfterMath will run a series of measurements, starting with OCP, and then continue by performing a three-segment linear sweep, measuring current as a function of applied potential.  LPR measurements typically take several minutes to complete.  When the measurement is complete, the resulting data is displayed in a voltage vs. current plot.  The resultant data should be linear (or close to linear) and the forward and reverse sweep should nearly overlay each other (see Figure 3). 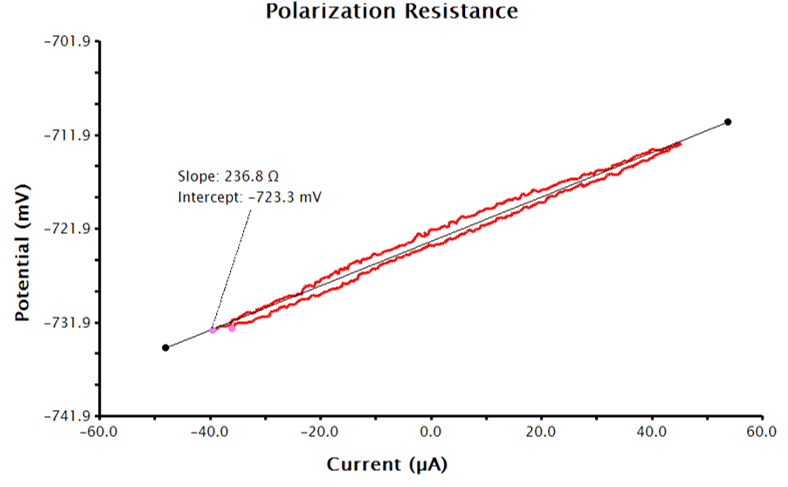 Remember that the output data provided by AfterMath for LPR measurements are guided by the information provided to AfterMath before the experiment.  With only the above inputs, AfterMath will automatically calculate corrosion potential and the linear resistance at the corrosion potential.  Note, however, that normalizing the slope of the voltage-current plot by the area of the working electrode results in polarization resistance, so the slope is proportional to the polarization resistance.  To calculate polarization resistance and/or corrosion current density and corrosion rate automatically in AfterMath, the researcher must provide additional information before the experiment is performed (see Sections 4.1.2 and 4.1.3, respectively).
Back To Top

For AfterMath to automatically calculate the normalized polarization resistance, the Basic Parameters tab must be filled out as in Section 4.1.1, and the area of the working electrode must be known.  To add the area of the working electrode into AfterMath, go to the Basic Parameters tab, check the checkbox next to Normalize By Area, and provide the surface area of the working electrode to AfterMath at the Sample Area input with the appropriate units selected (see Figure 4).  With this data, the LPR measurement will generate a plot of current density vs. potential (see Figure 5).  Notice that the added tool automatically calculates normalized polarization resistance by generating a best-fit line for the data.  The pink control points of this tool can be manually adjusted to improve the fit to the data, if necessary. 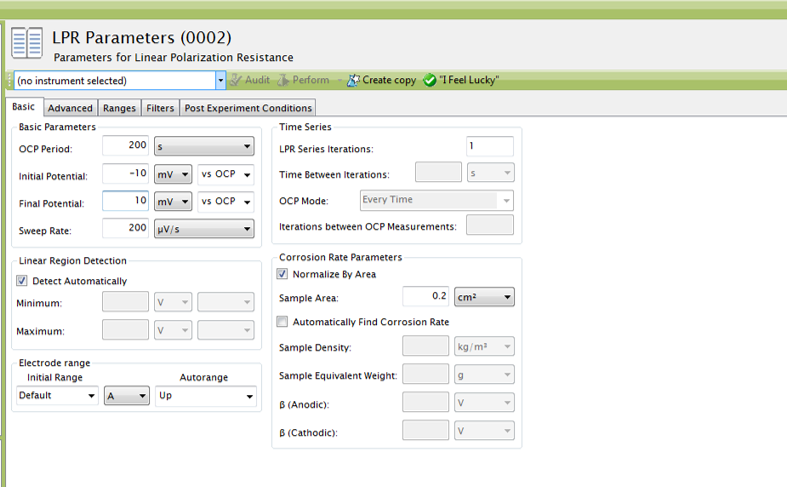 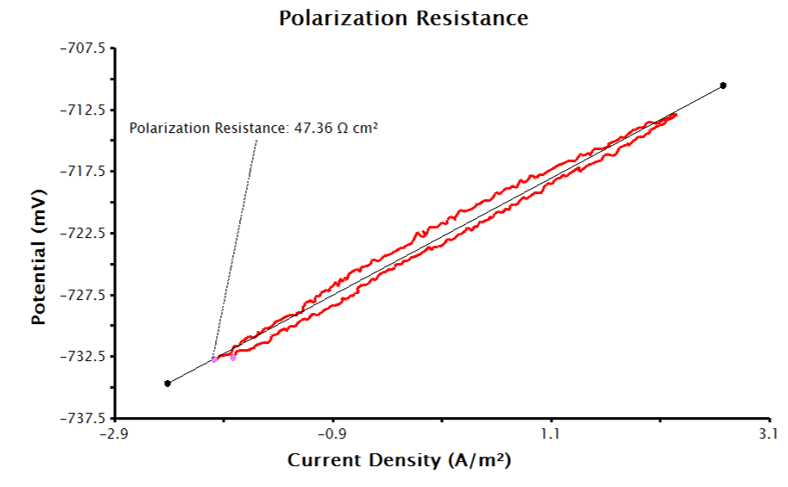 To have AfterMath automatically calculate the corrosion current density and corrosion rate, the Basic Parameters tab must be filled as in Sections 4.1.1 and 4.1.2, but even more inputs are needed.  Click the checkbox next to Automatically Determine Corrosion Rate on the Basic Parameters tab and enter the sample’s density, equivalent weight, and Tafel constants with appropriate units.  With the supplied inputs, the LPR measurement will generate a plot of current density vs. potential, similar to Figure 5.  A best-fit line is automatically added to the data and the polarization resistance, corrosion potential and corrosion rates are calculated (see Figure 6).  The pink control points of this tool can be manually adjusted to improve the fit to the data, if necessary. 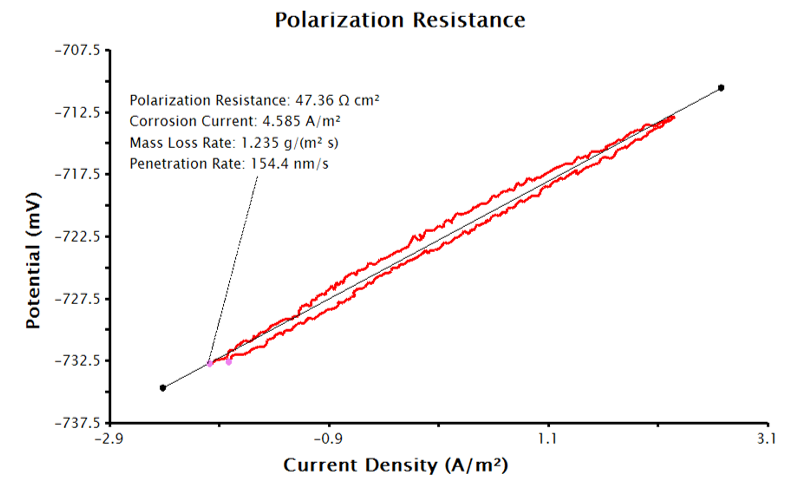 4.2Setup of an LPR Over Time Measurement

AfterMath has a built-in functionality that enables a single LPR measurement to be expanded to a LPR over time measurement.  When a series of LPR measurements are made over time, AfterMath generates additional data plots displaying the corrosion parameters over time.  The types of plots that are generated are determined by the information available to AfterMath about the system under study before the data is collected.  For this reason, it is advantageous to provide AfterMath with the appropriate information about the system under study before starting the experiment, if it is available.  These values can be supplied on the LPR Basic Parameters window in the lower right hand side in the Corrosion Rate Parameters panel (see Figure 4 and Section 4.1 for a detailed discussion on system inputs and AfterMath outputs).  To perform a LPR over time measurement:
LPR over time measurements can take several hours depending on the parameters selected.  When the data acquisition is complete, AfterMath plots the data.  Plots will include corrosion potential vs. time, polarization resistance vs. time, and the individual LPR measurements and OCP measurements that were collected and utilized to generate the time plots.  A sample polarization resistance vs. time plot generated by AfterMath is provided (see Figure 7). 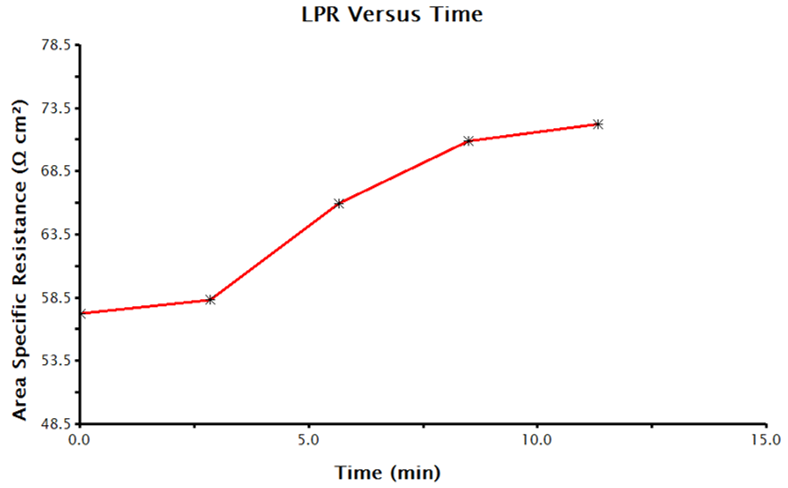 Pine Research has also created a worksheet (in Microsoft Excel format) to aid in determining the appropriate values for an LPR experiment parameters using AfterMath.  For example, many times a researcher may simply know they wish to acquire LPR data "every 1 hour for a total duration of 16 hours".  In cases like this, the worksheet is useful for visualizing the overall LPR experimental flow and calculating the correct values for each step shown in AfterMath.  See link here:

AfterMath provides tools that can be used to manipulate and gain additional insight into LPR data after it has been acquired.  For example, after data collection a potential-current plot can be converted to a potential-current density plot using built-in AfterMath functions, or a corrosion rate can be calculated from existing LPR data using the LPR Baseline Tool.  AfterMath follows SI units in electrochemical experiments, so the appropriate units are used and saved with the manipulated data.
Back To Top

The axes of an LPR potential-current plot can be manipulated in AfterMath to an LPR potential vs. current density plot (see Figure 8).  For the example provided in Figure 8, the current data were normalized to a 0.20 cm2 electrode area and the data were appended to a secondary x-axis (as opposed to replacing the existing x-axis).  To manually manipulate the axis of such a data plot, perform the following steps: 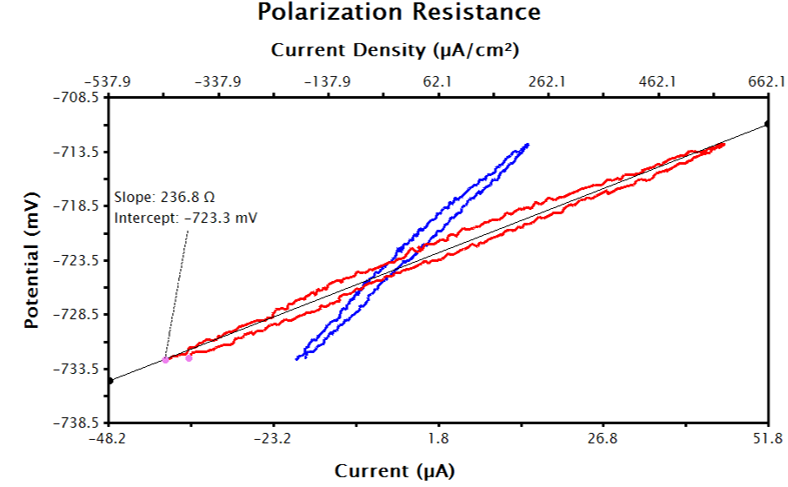 AfterMath has an LPR Baseline tool that enables the determination of polarization resistance and the corrosion rate after collection of LPR data.  The appropriate constants need to be provided by the researcher to the tool in order to make these calculations.  The required values/constants are 1) area of the working electrode, 2) density of the working electrode material, 3) equivalent weight of the working electrode material, and 4) the Tafel constants for the system under study.  The following gives step-by-step instructions for using the LPR Baseline tool:
After performing the above steps, the LPR plot should be updated with a text box reporting the calculated corrosion current, polarization resistance, and corrosion rate (see Figure 9). 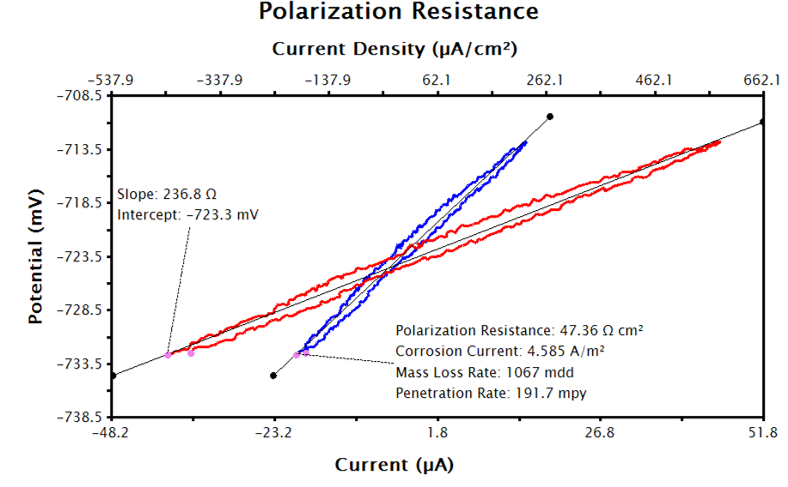