Chronopotentiometry (CP) is a galvanostatic method also known as constant current (CC) in the battery field.  It is related to galvanostatic bulk electrolysis and has several variants, including Rotating Electrode (CP-RDE) and Rotating Cylinder (CP-RCE).

Chronopotentiometry (CP) is a galvanostatic method in which the current at the working electrode is held at a constant level for a given period of time. The working electrode potential and current are recorded as a function of time.  Researchers employ this method to study chemical reaction mechanisms and kinetics.  It is also frequently used to study batteries and electrodeposition.  CP is typically performed in an unstirred electrochemical cell; although, some researchers employ rotating electrodes in conjunction with CP.

Rotating Disk Chronopotentiometry (CP-RDE)
Typically, current is held constant between working and counter electrodes while potential is measured at the working electrode, relative to the reference electrode.  Redox-active species diffuse to the working electrode surface to balance the applied current, until the diffusion-limited concentration of redox species reaches zero at the electrode surface, at which time potential changes to the redox potential of the next species, if present, in solution (which could be solvent).  CP is also commonly used during battery charge and discharge experiments.
Back To Top

Numerous texts thoroughly explain electrochemical theory and should be consulted for a complete understanding of this method.

.  As a constant current is applied to the working electrode,

drops to zero at the electrode surface, the potential starts to rapidly increase to more negative values. The resulting

curve is much like a potentiometric titration with a transition time,

(analagous to titration equivalence point). The potential at one half

.  The transition time is related to the concentration and diffusion coefficient of

is the concentration of

is the number of electrons,

is the working electrode area,

is the diffusion coefficient, and

is the sweep rate.
For rapid electrode kinetics, the time-based Nernstian equation is

should give a straight line with slope of

curve.
Additional and more complete background of this theory is provided in the Theory section of the Knowledgebase.

Theory
Back To Top 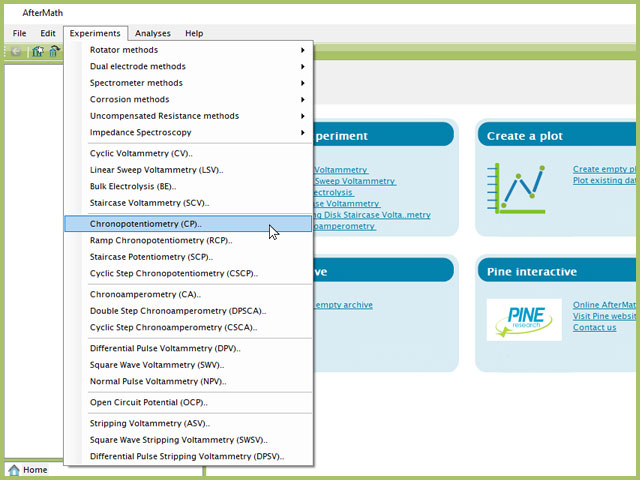 Doing so creates an entry within the archive, called CP Parameters. In the right pane of the AfterMath application, several tabs will be shown (see Figure 2). 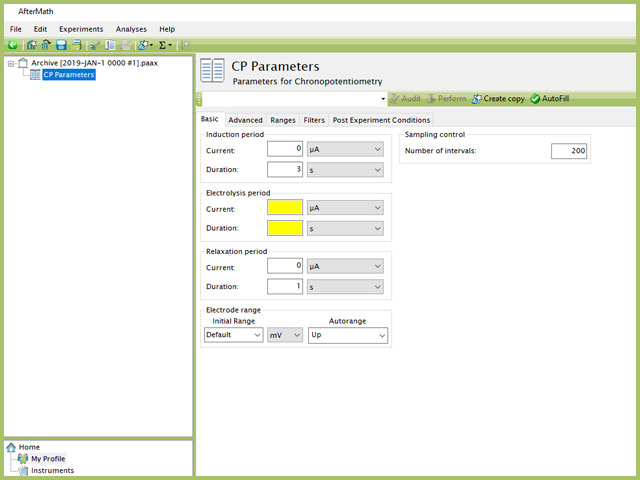 The basic tab contains fields for the fundamental parameters necessary to perform a CP experiment.  AfterMath shades fields with
yellow when a required entry is blank and shades fields pink when the entry is invalid (see Figure 3). 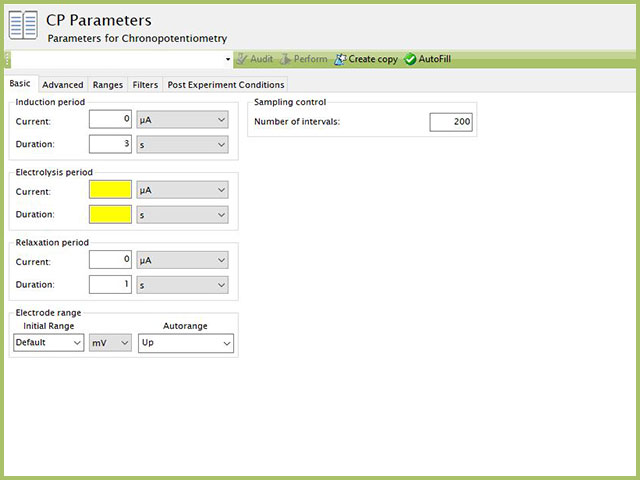 Induction Period a set of initial conditions are applied to the electrochemical cell and the cell equilibrates at these conditions.  Data are not collected during the induction period, nor are they shown on the plot during this period.
After the induction period, the current applied to the working electrode is stepped to the specified value for the duration of the experiment, which is called the electrolysis period.  The galvanostatic circuit of the instrument maintains constant applied current while simultaneously measuring the potential at the working electrode relative to the reference electrode.  During the electrolysis period, potential and current at the working electrode are recorded at regular intervals as specified on the Basic tab.
The experiment concludes with a relaxation period.

Relaxation Period  During the relaxation period, a set of final conditions (specified on the Advanced tab) are applied to the electrochemical cell and the cell equilibrates at these conditions.  Data are not collected during the induction period, nor are they shown on the plot during this period.
A plot of the typical experiment sequence, containing labels of the fields on the Basic tab, helps to illustrate the sequence of events in a CP experiment (see Table 1 and Figure 4).

Field labels in AfterMath will eventually include symbols, such as those used in the waveform plot below.  Consult the cross-reference table (see Table 1) to match field names with symbols. 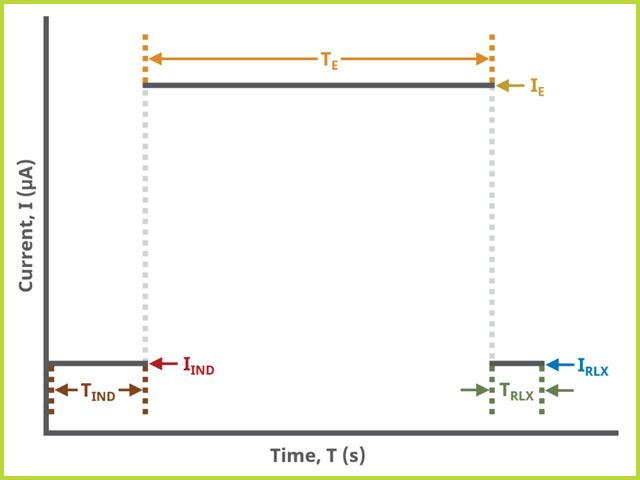 Understanding Post Experiment Conditions Tab are applied to the cell, and the instrument returns to the idle state.  The default plot generated from the data is measured potential vs. time, called a chronoamperogram.
Back To Top 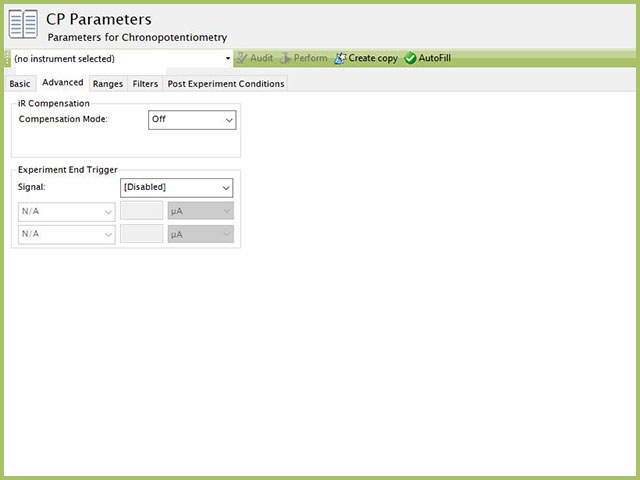 What is iR drop? This mode is used to correct for uncompensated resistance in the electrochemical cell.
In a CP experiment, the researcher might want to have AfterMath monitor the response (input) and then stop the experiment a specific current, potential, and/or charge.  This value is called a trigger and is set in the Experiment End Trigger group on the Advanced tab (see Figure 5).  For CP, the signals for the trigger can be potential or current.  A common example of using this trigger is in the charging of a battery.  A researcher would charge the battery by performing a CP experiment (also called a CC or constant current)  with the trigger set to its upper potential limit (e.g., 100% SOC).  Once this potential limit is reached, the CP experiment terminates and retains the data collected up to the trigger endpoint.  More information about end triggers is available on the Knowledgebase.

Electrode Range These fields are often duplicated, and linked to, the same fields on the Basic tab.  Additionally, a field for Autorange control for both potential and current appears on this tab.   More information on autorange is available elsewhere on the knowledgebase.

The typical chronopotentiogram for a

solution of Ferrocene in

shows a plot similar to a potentiometric titration (see Figure 6). Initially, the potential is slightly rising until nearly all of the ferrocene at the electrode is consumed, at which point the potential rises rapidly through an inflection point, followed by a trailing off of the potential after the inflection point.  AfterMath has many ways to view and analyze data as well as to customize plots.  These additional aspects of AfterMath are detailed elsewhere in the knowledgebase. 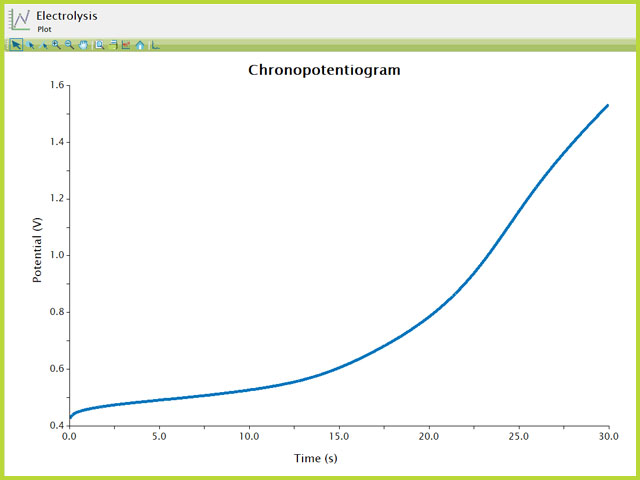 The addition of a Baseline Tool aids in finding the inflection point, the point at which the slope of the plot is greatest (see Figure 7).  Once the tool has been added to the trace on the plot, right-click the tool to view its properties.  There, change the baseline mode to Tangent to easily find the inflection point.  The potential at

of the inflection point is approximately the

for the species of interest (

). Two additional Crosshair tools have been added to the plot to show the time at the inflection point and the time of

of the inflection point. 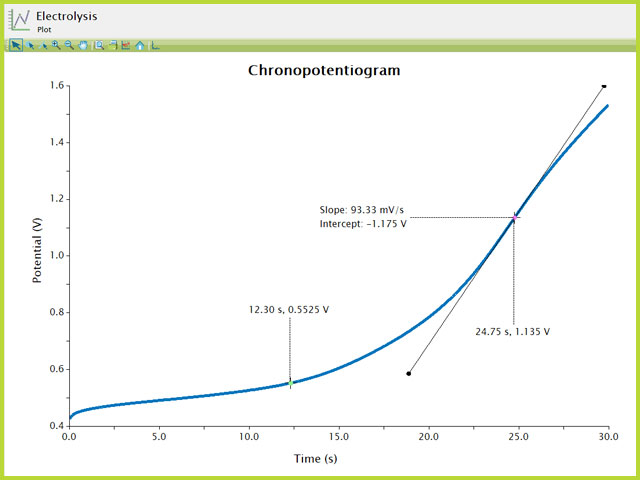 Le, X. T.;&nbspViel, P.;&nbspTran, D. P.;&nbspGrisotto, F.;&nbspPalacin, S. &nbspSurface Homogeneity of Anion Exchange Membranes: A Chronopotentiometric Study in the Overlimiting Current Range.  The Journal of Physical Chemistry B, 2009, 113(17), 5829-5836.  The potential drop across the membrane was monitored as a function of time.  By determining the transition time (point of inflection) calculate diffusion coefficients were calculated for several chloride salts in

solutions. An exquisite example, considering the authors were able to determine diffusion coefficients of non-redox active species.
In another example,  Nagaraju and Lakshminarayanan used CP to grow mesoporous Au films for use in the electro-oxidation of alcohols in alkaline media.

Nagaraju, D. H.;&nbspLakshminarayanan, V. &nbspElectrochemically Grown Mesoporous Gold Film as High Surface Area Material for Electro-Oxidation of Alcohol in Alkaline Medium.  The Journal of Physical Chemistry C, 2009, 113(33), 14922-14926. The researchers showed that varying the current density and deposition yielded different surface areas.  These films were then used to electro-oxidize methanol or ethanol indicating that they could be used in direct alcohol alkaline fuel cells.
Back To Top