Chronoamperomtery (CA) is a potential step method and is also known as constant potential bulk electrolysis, controlled potential amperometry, and potential pulse electrolysis.  In its most simple case, CA is the measurement of current vs. time due to a change (step, pulse) in potential.  Chronocoulometry (CC) is a variant of CA where the current is integrated with respect to time yielding charge, which is plotted vs. time.  Such an experiment is post-processed following a CA experiment.

Chronoamperometry (CA) is a widely used method in electrochemistry, due in part to its relative ease of implementation and analysis.  CA is highly sensitive, as most electrochemical methods are; however, CA is poorly selective.  In an unstirred cell, in response to a potential step perturbation, electrochemically active species will diffuse to the surface of the working electrode as a function of the potential applied.  At the onset of a potential step, a large current arising from ion flux to the electrode surface to balance the change in potential gives rise to a capacitive current, which decays rapidly (just like any RC circuit

Cottrell Equation
Back To Top

.  In general, the potential step applied to the working electrode should be sufficiently more negative than

such that reduction of

is complete at the surface of the electrode (i.e., surface concentration of

at the electrode surface is

).  When this occurs, the current is diffusion-limited, much like the current that flows in cyclic voltammetry

Cyclic Voltammetry (CV) after the potential of the electrode sweeps past

.
When the current is diffusion-limited in CA, the current-time response is described by the Cottrell equation

is the number of electrons transferred in the half reaction,

is the area of the electrode,

is the initial concentration, and

is time.
Back To Top 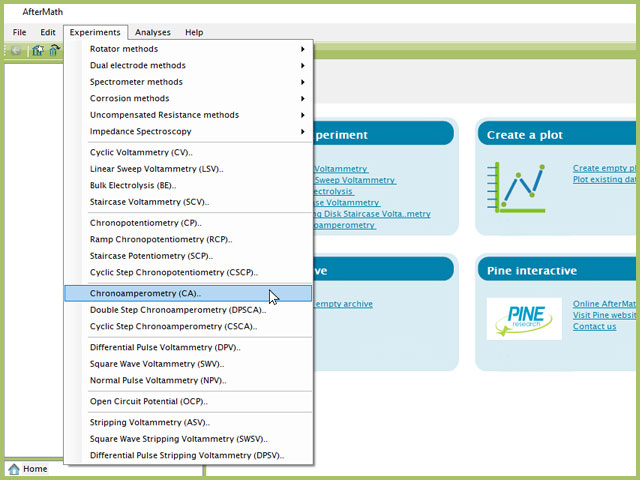 Doing so creates an entry within the archive, called CA Parameters. In the right pane of the AfterMath application, several tabs will be shown (see Figure 2). 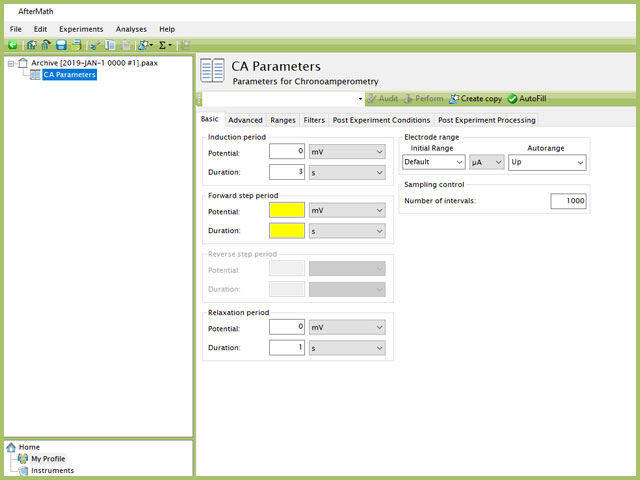 As with most Aftermath methods, the experiment sequence is
Induction Period → Electrolysis Period (Forward Step Period) → Relaxation Period → Post-Experiment Idle Conditions
Unlike most experiments, the Induction and Relaxation Periods are on the Basic Tab.  The parameters for a CA experiment are fairly simple compared to other methods in AfterMath.
In general, enter minimum required parameters on the Basic tab and press "Perform" to run an experiment.  AfterMath will perform a quick audit of the parameters you entered to ensure their validity and appropriateness for the chosen instrument, followed by the initiation of the experiment.  In some cases, users may desire to adjust additional settings such as filters, post- experiment conditions, and post-experiment processing before clicking the "Perform" button.  Continue reading for detailed information about the fields on each unique tab.
Back To Top

The basic tab contains fields for the fundamental parameters necessary to perform a CA experiment.  AfterMath shades fields with
yellow when a required entry is blank and shades fields pink when the entry is invalid (see Figure 3).

Induction Period a set of initial conditions are applied to the electrochemical cell and the cell equilibrates at these conditions.  Data are not collected during the induction period, nor are they shown on the plot during this period.
After the induction period, the potential applied to the working electrode is stepped to the specified value for the duration of the experiment, which is called the electrolysis period (on CA, this group may be labeled Forward Step Period, depending on your version of AfterMath).  The potentiostatic circuit of the instrument maintains constant applied potential relative to the reference electrode while simultaneously measuring the current at the working electrode.  During the electrolysis period, potential and current at the working electrode are recorded at regular intervals as specified on the Basic tab.  Sampling control defines the number of intervals (number of data points) collected during the electrolysis period.  With Electrolysis period duration, a sampling rate can be defined as,

Users should enter a number of intervals that their analysis requires.  Commonly, CA experiments are sampled at a lower rate (1 sample/s).  Not all sampling rates are allowed due to differences in hardware (WaveNow series vs. WaveDriver series, for example).

Electrode Range These field settings within the Electrode Range group explicitly define the initial current and/or potential ranges used by the potentiostat during the experiment.  Additionally, a field for Autorange control for both potential and current appear on this tab. Autorange employs algorithms to adjust the current and potential ranges, as needed, to the most appropriate ranges available to match the measured signal(s).  More information on autorange is available elsewhere on the knowledgebase.

Autorange
The experiment concludes with a relaxation period.

Relaxation Period  During the relaxation period, a set of final conditions (specified on the Advanced tab) are applied to the electrochemical cell and the cell equilibrates at these conditions.  Data are not collected during the induction period, nor are they shown on the plot during this period.
A plot of the typical experiment sequence, containing labels of the fields on the Basic tab, helps to illustrate the sequence of events in a CA experiment (see Table 1 and Figure 4). 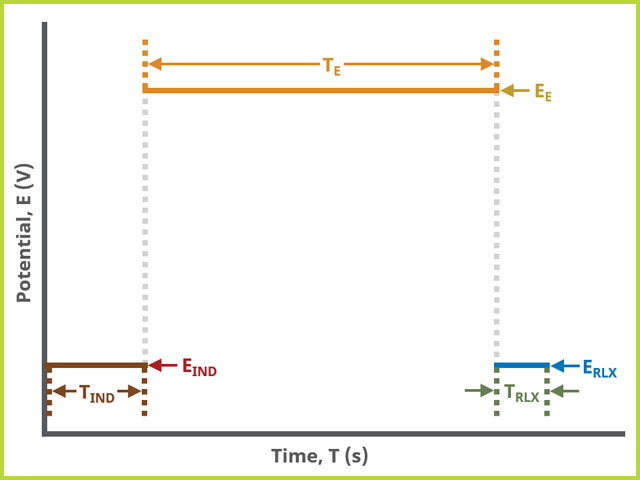 Understanding Post Experiment Conditions Tab are applied to the cell, the post-experiment processing tasks perform, and the instrument returns to the idle state.  The default plot generated from the data is current vs. time.
Back To Top 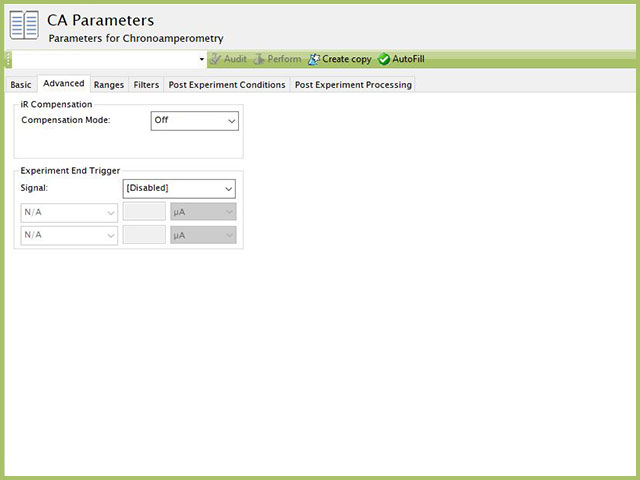 iR Compensation This mode is used to correct for uncompensated resistance in the electrochemical cell.
In a CA experiment, the researcher may want to have AfterMath monitor the response and then stop the experiment at a specific current, potential, and/or charge.  This value is called a trigger and is set in the Experiment End Trigger group on the Advanced tab (see Figure 5).  For CA, the signals for the trigger can be potential, current, or charge.  Details on the End Trigger settings are found elsewhere in the knowledgebase.

Electrode Range , as is for autorange.

At the completion of this experiment, there are additional post-processed plots that can optionally be generated.  Additional plots will increase the size of the archive; however, if they are desired, it can save time to generate them automatically than manually later (see Figure 6). 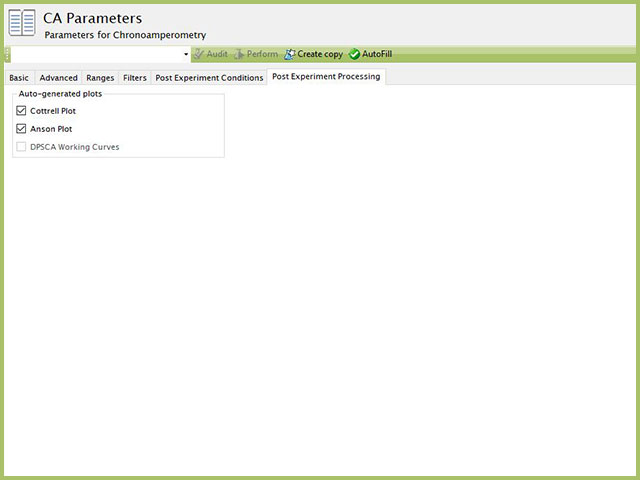 On the Post-Expeirment Processing Tab for CA, users can enable two additional plots:  Cottrell Plot (see Figure 7) or Anson Plot (see Figure 8).  Tick the checkbox next to the plot to add them to the archive following the completion of the experiment.
Ticking the box next to Cottrell Plot displays a plot of i vs. t-1/2 (see Figure 7).  Ticking the box next to Anson Plot displays a plot of Q vs. t1/2  (see Figure 8).  Note that for the Cottrell Plot, the level portion in the plot is actually the time prior to the current spike shown in the chronoamperogram (see Figure 8).  That is, earlier time points are to the right in a Cottrell Plot.  This is not the case for an Anson Plot because integrating the current with respect to time gives charge.  The endpoint in an Anson Plot is the total amount of charge passed during the experiment.  Monitoring the charge passed during an experiment is a variant of chronoamperometry called Chronocoulometry. 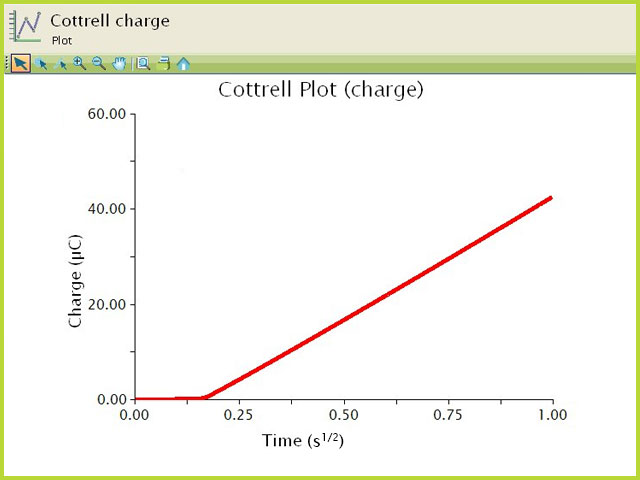 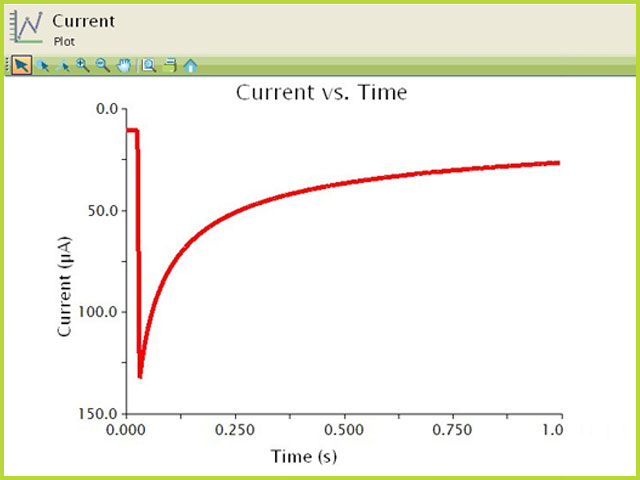 In the first example, Tennyson et. al used chronoampometry to determine the diffusion coefficients (D) and number of electrons (n) for a series of indirectly connected bimetallic complexes.

allows for the calculation of

.  Though the experiments are relatively simple and straightforward, the researchers then used these values for more complicated electrochemical experiments that enabled them to determine the degree of electronic coupling between the two metallic centers.  Understanding the degree of electronic coupling could allow for facilitation to otherwise inaccessible catalysts and materials.
In another example, researchers show how CA was used to measure extremely small diffusion coefficients of redox polyether hybrid cobalt bipyridine molten salts. Crooker and Murray performed chronoamperometry on a series of undiluted molten salts and were able to obtain diffusion coefficients as low as 10-17 cm2/s.

Cyclic Voltammetry (CV) and were able to show that the reaction remains quasireversible despite small k0 rates because DO values are so low.
Here, chronoamperometry to directly measure rate constants. Smalley et al.

Wolfe, R. L.;&nbspBalasubramanian, R.;&nbspTracy, J. B.;&nbspMurray, R. W. &nbspFully Ferrocenated Hexanethiolate Monolayer-Protected Gold Clusters.  Langmuir, 2007, 23(4), 2247-2254.   Normallly, thermogravimetric analysis (TGA) would be used to calculate the number of thiolates per nanoparticle; however, in this case, TGA was inconclusive due to a slow loss of mass over the applied temperature range.  The researchers instead monitored the charge passed (Q) over time for the solution of nanoparticles of known concentration.  By knowing the total charge passed and the particle concentration, they determined the number of ligands per nanoparticle.  This is an excellent example of how electrochemistry can be used in place of more traditional characterization techniques.
In another example of using post-processed CA data, researchers employed chronocoulometry (CC, a post-experiment calculation of CA data), but rather than using it for quantification purposes, the researchers use it to evoke a change in the system. Zhang et al. use chronocoulometry with predefined endpoints to produce Ag nanoparticles of various shpaes and sizes that were confined to an electrode surface.

Zhang, X.;&nbspHicks, E. M.;&nbspZhao, J.;&nbspSchatz, G. C.;&nbspVan Duyne, R. P. &nbspElectrochemical Tuning of Silver Nanoparticles Fabricated by Nanosphere Lithography.  Nano Lett., 2005, 5(7), 1503-1507.   By varying the amount of charge passed the researchers were able to show that triangular nanoparticles oxidize first on the bottom edge, followed by triangular tips, followed by out-of-plane height.  Since the researchers also coupled spectroscopy to their electrochemical experiments they were also able to show how the SPR band changes with nanoparticle shape evolution.  This example illustrates how electrochemistry can be used to evoke a change in a system rather than simply used as a method to monitor changes or determine the physical parameters of the system.
Back To Top