Electrochemical Impedance Spectroscopy (EIS) is a very complex subject in electroanalytical chemistry.  This article is designed to help scientists understand what EIS is, how it works, and why EIS is a powerful technique.  To understand electrochemical impedance spectroscopy, we will start with the concept of electrical resistance via Ohm's law (Equation 1.1), where

is the voltage between points (a) and (b),

is the current that flows between (a) and (b), and

is the electrical resistance, represented symbolically by a resistor in Figure 1.1.  Conceptually,

represents the opposition to the current flowing through an electrical circuit.  The larger the

, the less current will flow across the resistor at a given voltage. 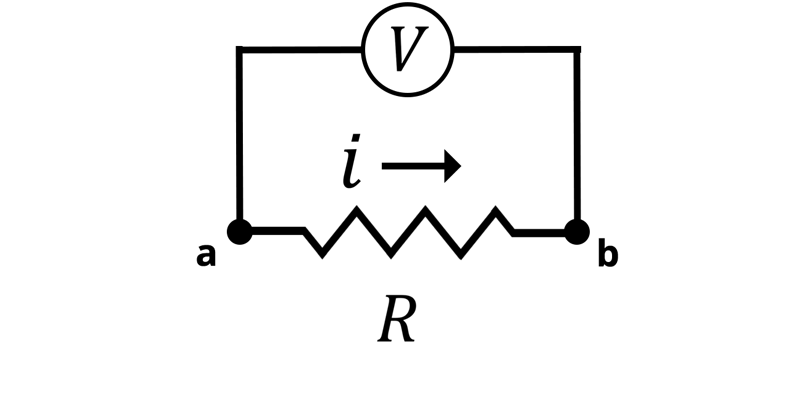 Figure 1.1 Circuit Diagram of Ohm's Law. The Voltage (V) is applied between points (a) and (b). The current (i) flows across the resistor (R).

This description of resistance via Ohm's law applies specifically to direct current (DC), where a static voltage or current is applied across a resistor.  Impedance, by contrast, is a measure of the resistance a circuit experiences related to the passage of an alternating electrical current (AC).  In an AC system, the applied signal is no longer static but oscillates as a sinusoidal wave at a given frequency.  The equation for impedance is analogous to Ohm's law; however, instead of using

for resistance we use

for impedance (see Equation 1.2).
The impedance

is proportional to the frequency-dependent voltage

is the angular frequency of an oscillating sine wave.  The definition of impedance comes from electrical circuits, and as a result, voltage is commonly used to define impedance.  However, in electrochemical impedance spectroscopy, we will switch from using voltage

is the potential sine wave amplitude,

is the angular frequency,

is the time, and the term

represents the phase of the waveform.  The angular frequency

is a measure of how many cycles per unit time the signal oscillates.  The amplitude

is a measure of the size of the potential or current signal.  The user controls the frequency and amplitude of the input potential signal with a potentiostat or frequency response analyzer (FRA).  The measured output current signal,

(Equation 1.4), has the same frequency as the input signal but its phase may be shifted by a finite amount, known as a phase shift or phase angle,

, will vary with the impedance of the electrochemical system at a given frequency.

A complete EIS experiment consists of a sequence of sinusoidal potential signals centered around a potential setpoint.  The amplitude of each sinusoidal signal remains constant, but the frequency of the input signal will vary.  Typically, frequencies of each input signal are equally spaced on a descending logarithmic scale from ~10 kHz - 1 MHz to a lower limit of ~10 mHz - 1 Hz.  For each input potential, a corresponding output current is measured at a given frequency.

Figure 1.5 Lissajous plot where the input potential and output current are perfectly in phase.  The resulting curve is a straight line with a slope proportional to the impedance at that frequency.

Figure 1.6 Lissajous plot where the input potential and output current are out of phase.  The resulting plot is an oval. 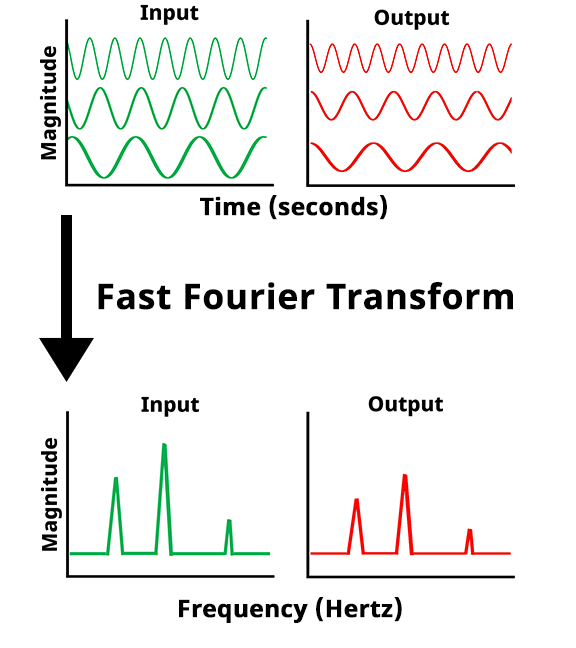 , and the phase angle

are determined from the FFT analysis.  With these data we can describe the different plotting conventions associated with EIS.  The following description simplifies the mathematics, but for a more detailed mathematical description of EIS, check out our Knowledgebase article.

divided by the current amplitude

, as shown in Equation 2.1.
If we plot the magnitude of the impedance

and the phase angle

as a function of frequency on a double-axis plot, we get what is called a Bode plot (Figure 2.2). 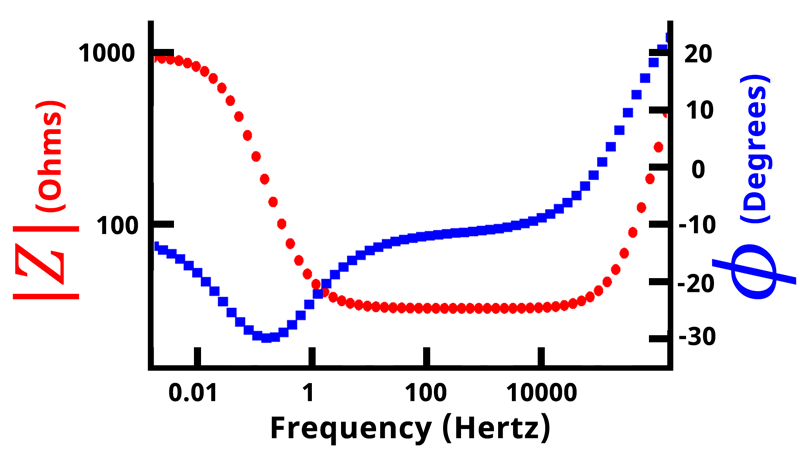 In a Bode plot,

is displayed on the primary vertical axis and

is displayed on the secondary vertical axis.  Frequency and impedance magnitude are normally plotted on a logarithmic scale, while the phase angle is displayed linearly.
There is another way to express EIS data.  Using polar coordinates, let us plot

as a ray originating from the center at an angle equal to the phase angle (Figure 2.3). 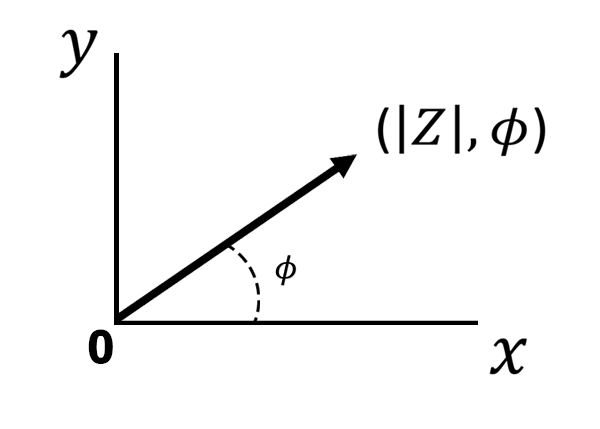 If we move from polar to cartesian coordinates, we can break the impedance magnitude into its x and y components (Figure 2.4). 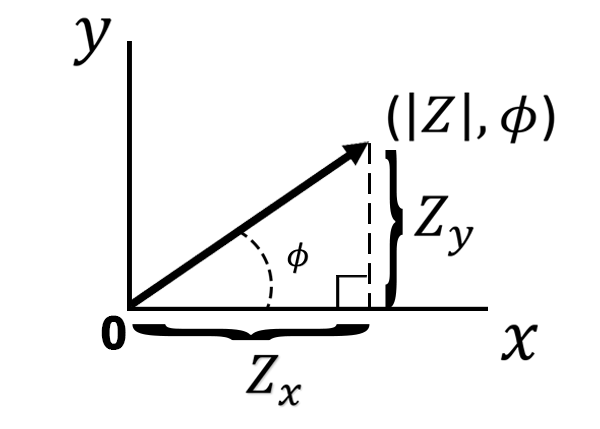 Figure 2.4 Expressing the Impedance Magnitude in terms of x and y components

Using trigonometry we can describe the impedance of the x-axis

and the impedance of the y-axis

can be described as the vector sum of

(Equation 2.4).
The impedance associated with the x-axis is referred to as the real impedance,

, and the impedance associated with the y-axis is referred to as the imaginary impedance,

.  The labels "real" and "imaginary" derive from a more detailed mathematical description of impedance that is beyond the scope of this article.  For those interested in a more advanced mathematical derivation, please see our Knowledgebase article linked here.

on the x-axis and the negative imaginary impedance 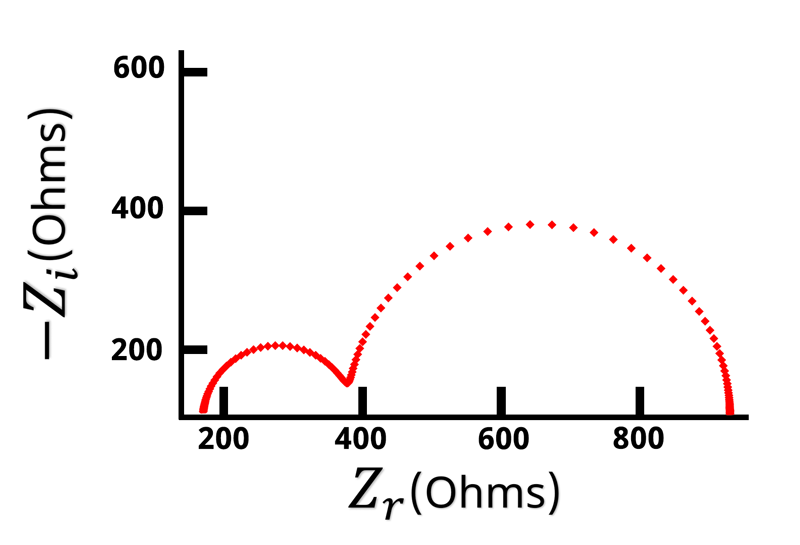 The imaginary impedance values on a Nyquist plot are commonly inverted as shown in Figure 2.5.  Alternatively, the

values are normally less than zero and it is more convenient to view shapes and patterns primarily in the first quadrant on a Cartesian graph (see Figure 2.5).  Another convention applied to Nyquist plots is orthonormality, or orthogonality, which refers to the usage of a 1:1 ratio for the visual scale of the x- and y-axes.  Note that this does not necessarily mean the numerical scales of the axes need necessarily be identical.  One simple way to think of this principle is that when drawing lines on an orthonormal plot around identical values on both axes, it would always make a perfect square (e.g., connect the points (0,0), (0,100), (100,100), and (100,0), and it will be a perfect square).
Nyquist plots are the most common form of displaying impedance data, followed by Bode plots.  Bode plots allow easy determination of frequency values, compared with Nyquist plots where frequency values are not plotted.  Generally, the lower-leftmost points on a Nyquist plot correspond to the highest frequencies, and following the trace to the right moves from high to low frequency.  In total, an electrochemical impedance spectroscopy experiment results in five columns of data:

3How to use Electrochemical Impedance Spectroscopy

to indicate the imaginary number

normally refers to the current in an electrochemical system, we will be using

.
To understand how we might model an electrochemical system, let us consider a 3-electrode configuration where a conductive working electrode is submerged in an aqueous electrolyte with a redox-active molecule as the analyte (Figure 3.1).  While not shown in Figure 3.1, a counter (auxiliary) electrode to maintain charge balance and a reference electrode to act as a stable reference point are implied in the system.  The working, counter, and reference electrodes are all connected to a potentiostat.  To learn more about how a potentiostat operates in such a configuration, please review our Knowledgebase article on how a potentiostat works.

What is a Potentiostat and how does it work? 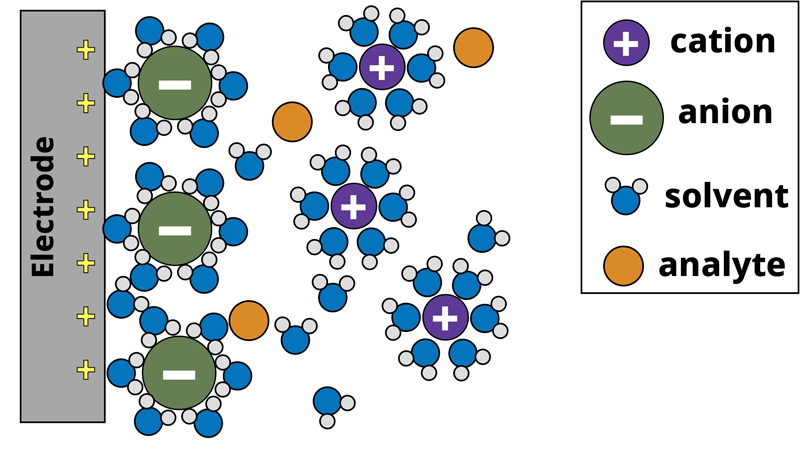 Figure 3.1 Model of electrode surface in a 3-electrode aqueous system.  The gray working electrode applies a positive potential that attracts the negatively charged anions to the surface, forming the electrochemical double-layer. 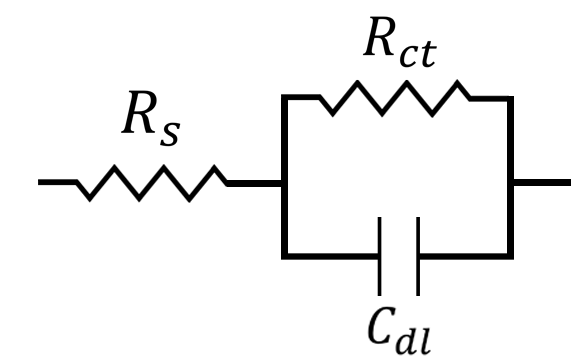 is the solution resistance,

is the charge transfer resistance, and

, however, there exist two possible pathways for the current to flow.  It can either move through the capacitor associated with the electrochemical double-layer

, or it can pass through the resistor associated with charge transfer

.  The current will always choose the path of least resistance, or lowest impedance.  In this case, the impedance of

vary as a function of frequency.
Back To Top

is the frequency of our applied potential.  When

, the denominator in the fraction

becomes very large and the fraction approaches 0.  This leaves

.  While there is no potentiostat that can apply a frequency of

Hz, it can often be inferred at the highest frequencies (1 MHz - 100 kHz) that the impedance is equivalent to the solution resistance

.  This is because mathematically as

).  Therefore, at high frequency the capacitor becomes the path of least resistance (Figure 3.3).
When the frequency of our applied potential is very small, or when

, the denominator in the fraction

becomes 1.  The impedance therefore reduces to

at low frequencies, and the current will travel through

.  In this case, the impedance of the capacitor

becomes very large, and the current will again follow the path of least resistance, which in this case goes through 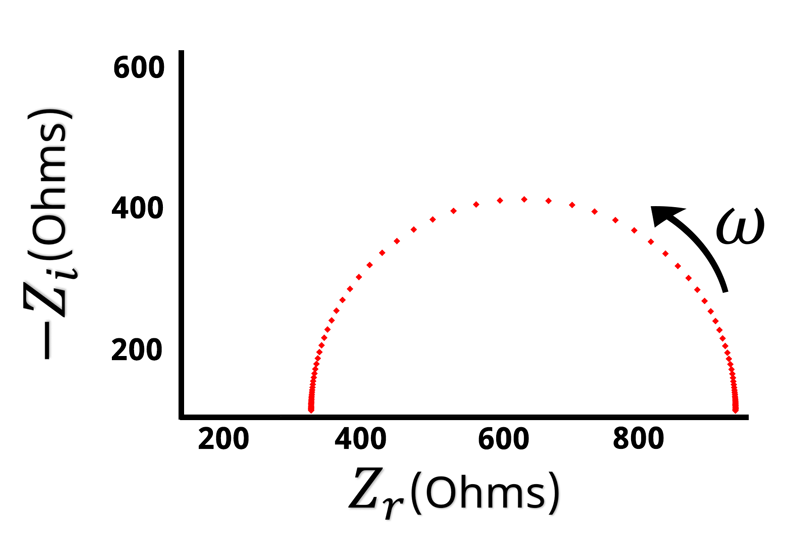 With our understanding of how the impedance behaves at high and low frequencies, values for

can be assigned when looking at the Nyquist plot (Figure 3.5). 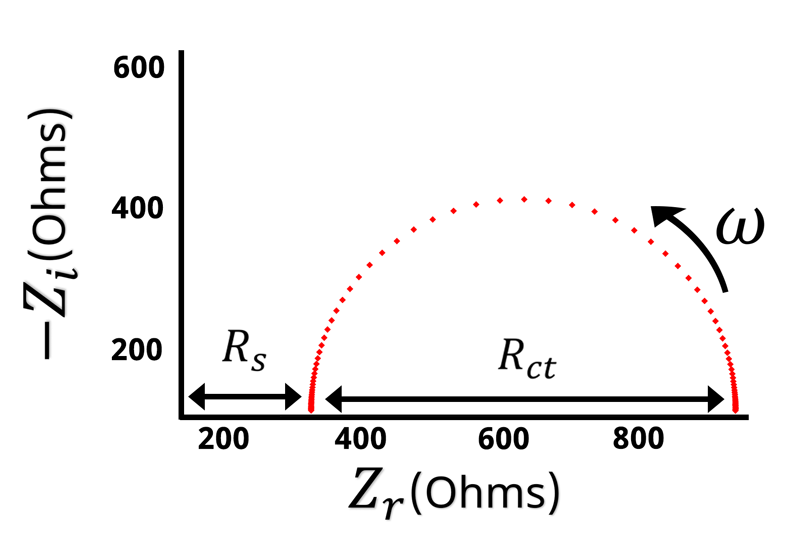 Figure 3.5 Nyquist plot with Rs and Rct labeled on the x-axis

is large the impedance is equal to

.  Conversely, on the opposite side of the semicircle is the low frequency impedance data.  When

is very low or close to zero, the impedance is equal to

.  Based on the high frequency data we know that

.  Looking at the Nyquist plot we can determine the value of

known, we can use equation 3.6 to calculate

.
The simple Randles circuit above is a fairly common system, but to model more complex electrochemical systems, advanced EIS fitting software is required.

AfterMath Downloads
Back To Top

3.3Why is Electrochemical Impedance Useful (DC vs AC voltammetry)

With a basic understanding of electrochemical impedance spectroscopy, how the technique works, how data is presented, and analyzing EIS data from a simple electrochemical system, the question arises: why use EIS?  The double-layer capacitance and solution resistance in an electrochemical system can be determined using DC voltammetry methods.  What is special about EIS?
The power of electrochemical impedance spectroscopy is in its ability to probe electrochemical processes on different time scales.  This is a unique feature of AC voltammetry when compared to DC voltammetry.  EIS is capable of probing electrochemical processes that might be happening at the same time but on different time scales.  For example, the charging of the electrochemical double-layer usually occurs on the microseconds time scale, but diffusion typically occurs on the hundreds of milliseconds time scale.  During a DC voltammetry experiment both processes are happening at the same time and they both contribute to the total current measured.  However, it might be difficult to deconvolute the current response from those two processes in a DC voltammetry experiment.  EIS by contrast can apply a frequency on the time-scale of each process.
The Randles circuit consists of a resistor and a capacitor in parallel, and that circuit is occasionally characterized by its RC time constant.  An RC time constant

describes how long the capacitor takes to charge up to ~63.2% of its maximum value, or how long it takes to discharge to ~36.8% of its maximum value.  Depending on the values of the resistor and capacitor, it could take a long or short time for the capacitor to charge.  Electrochemical processes can be thought of in a similar way.  Each electrochemical interface, whether it's a solid/liquid interface or a solid/solid interface can be modeled electrochemically as a Randles or RC circuit.  If the time constants of each interface are sufficiently different, then EIS can be used to detect and measure them.  If there were multiple electrochemical interfaces in a DC voltammetry experiment, it would be difficult to distinguish between them.  That being said, EIS would not be able to easily distinguish between two electrochemical processes with similar values for

AfterMath Downloads and we encourage you to download it and use the built-in circuit fitting tools to analyze your EIS data.
Electrochemical impedance spectroscopy is a complicated electroanalytical chemistry technique.  This article serves as an introduction to the technique.  There are many other aspects of electrochemical impedance spectroscopy that are not covered in this article; however, some are discussed in other Knowledgebase articles on our website.

The following YouTube video provides a short introduction to electrochemical impedance spectroscopy, and can be found along with other useful content on the Pine Research YouTube page.
Back To Top