An analysis is a node related specifically to the investigation of electrochemical impedance spectroscopy (EIS) data.  There are a few different types of analysis nodes that can be added to an archive, including circuit fit, transmission line, Kramers-Kronig, and simulation.  All of these types of analysis nodes can only be added onto an existing set of EIS data in an archive (see Figure 1 for an example of EIS data in AfterMath), with the exception of a simulation, which does not have this restriction. 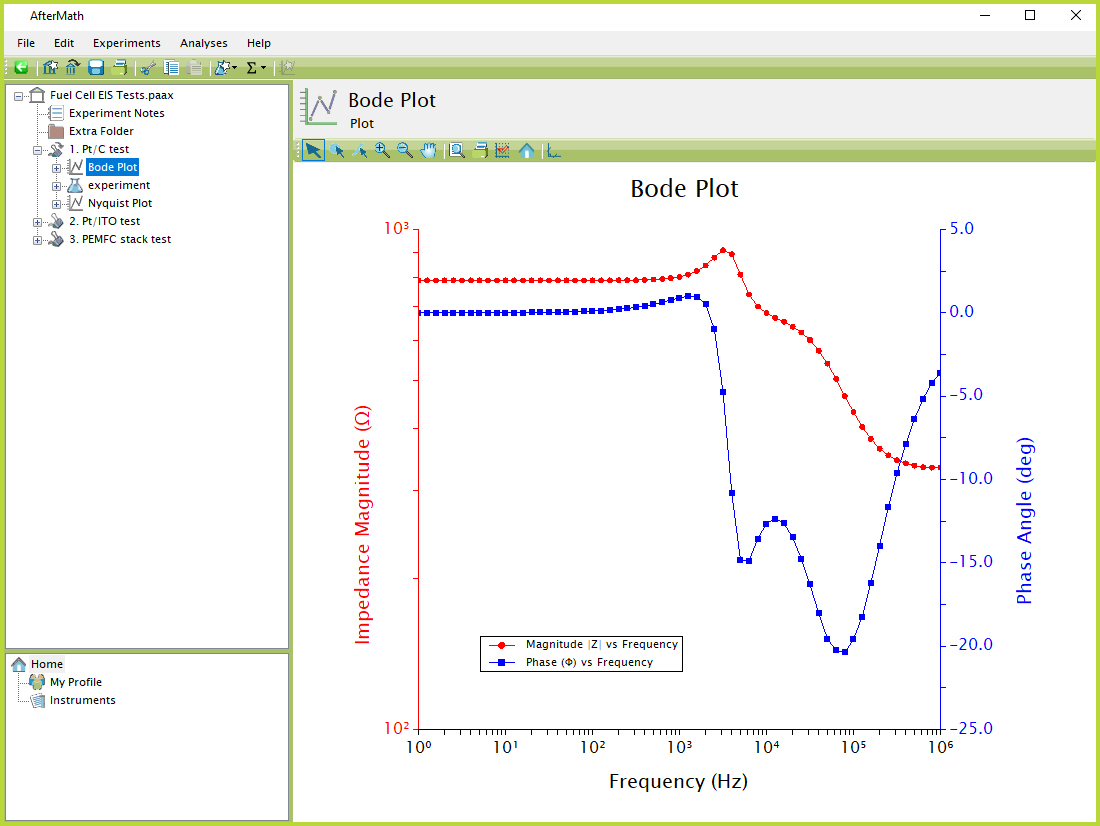 There are three ways to add a new analysis node.  First, with any part of an EIS data study folder

Study highlighted in the left tree structure, click the "Σ" symbol to open the drop-down menu of available analysis nodes (see Figure 2).  The second option is the "Analyses" menu, which also opens a drop-down containing the same set of options. 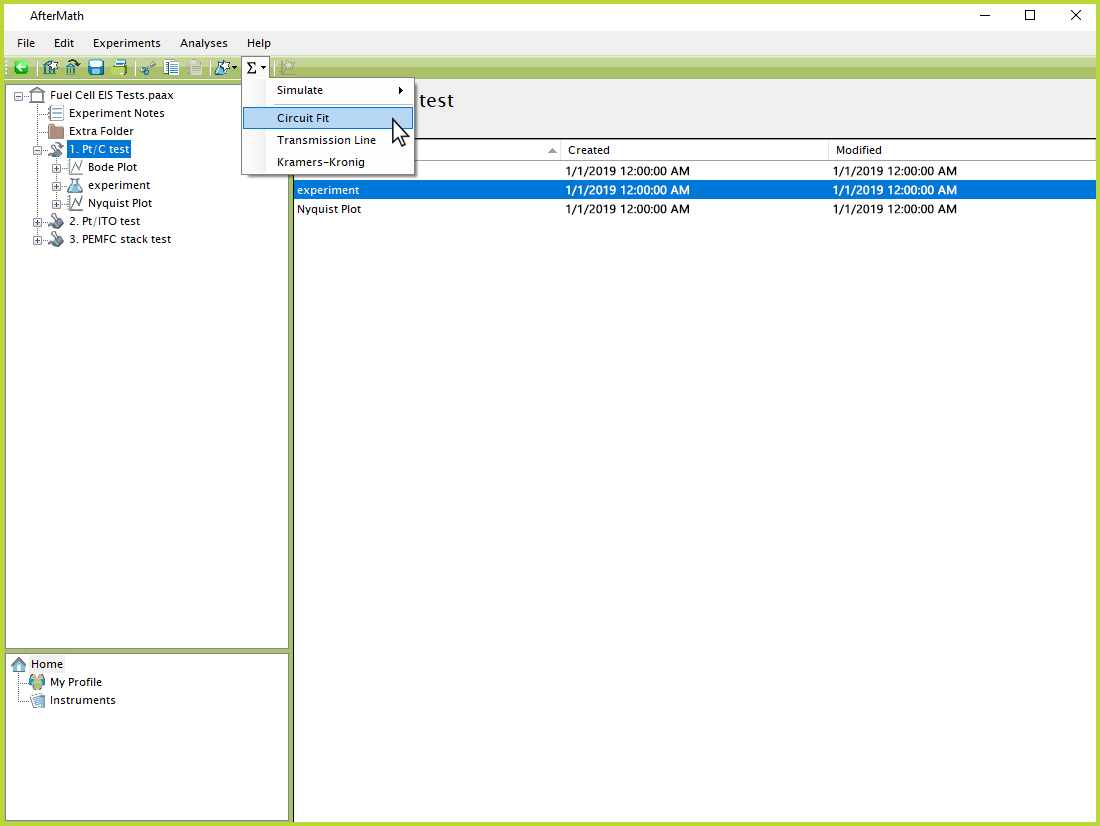 Alternatively, the third option is to right-click on any part of an EIS data study folder, then select "New" from the resulting menu and click "Analysis" to reveal the set of options (see Figure 3). 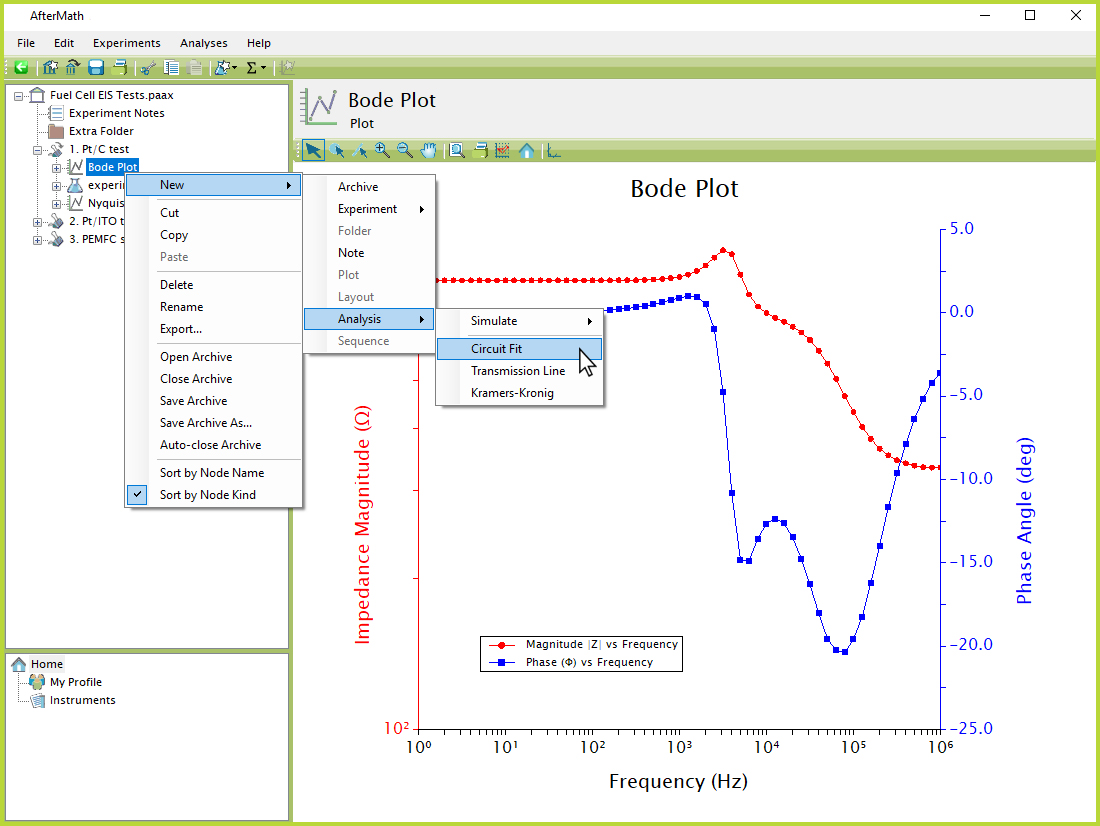 The most commonly-used analysis is called "Circuit Fit", which is used to mathematically fit experimental EIS data to various circuit analogs.  The first window that appears when selecting "Circuit Fit" from the list of analysis options is the "Circuit Library" (see Figure 4).  This window displays a set of built-in circuit models to choose from, as well as the option for the user to construct a custom circuit by double-clicking "New..." under the "User-Defined Circuits" section.  Clicking this option opens a separate designer window where a custom circuit can be drawn to fit to the experimental data, and also saved as a template for future use (see Figure 5). 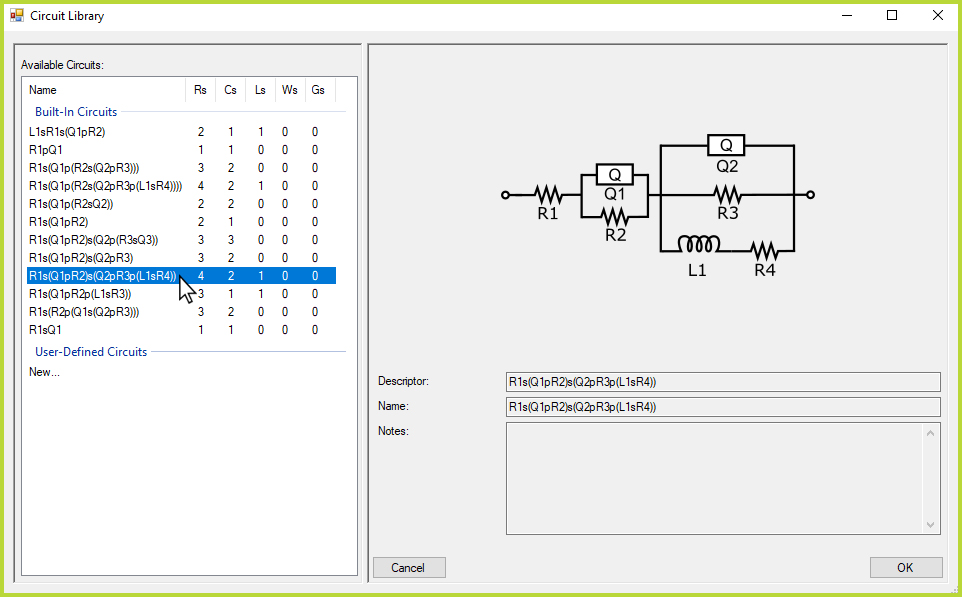 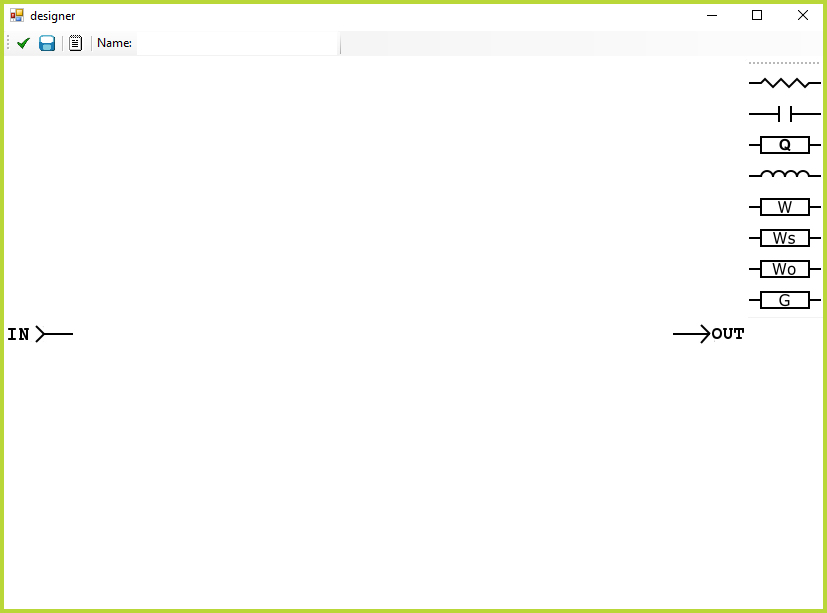 Once the desired circuit has been selected, AfterMath automatically performs a mathematical fitting operation on the EIS data and displays the results in the circuit fit node.  Fitting data are shown both numerically for each circuit parameter, as well as graphically on the adjacent Bode

Nyquist Plot These two plots can also be adjusted by using the drop-down menus above each plot labeled "View".  Residual error plots for the real and imaginary impedance can be viewed while adjusting the circuit fit if desired (see Figure 7). 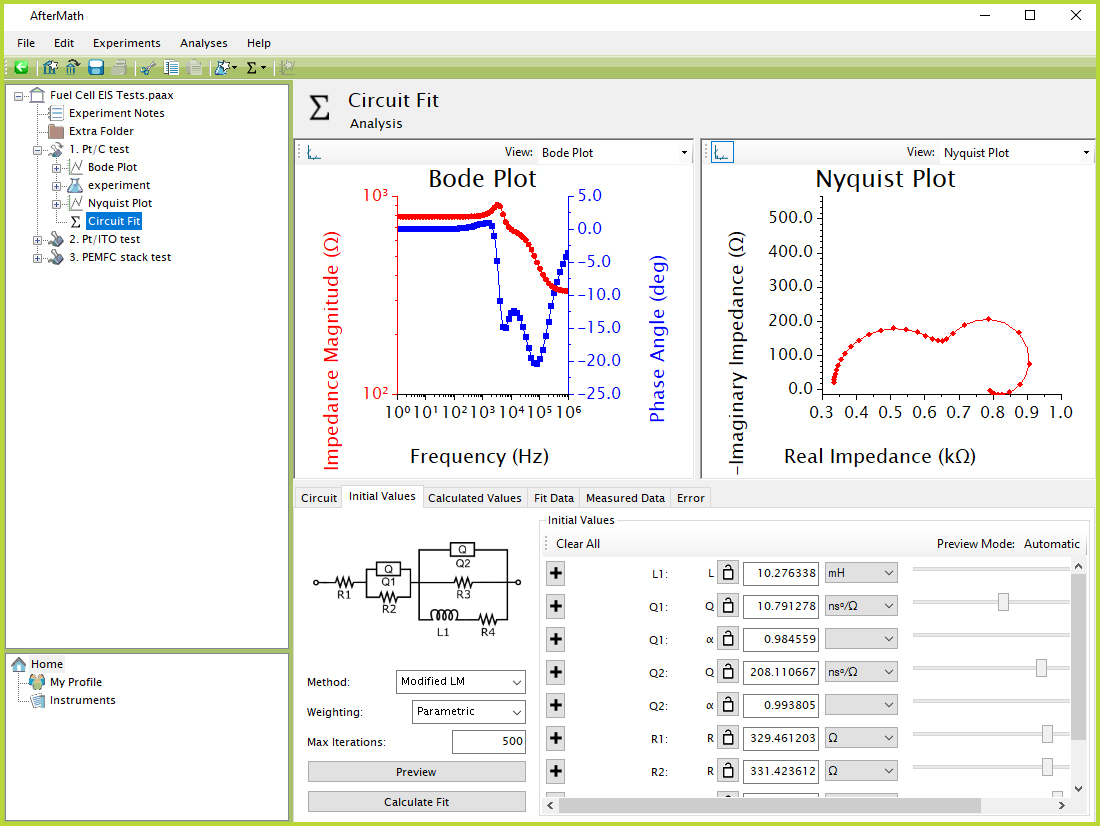 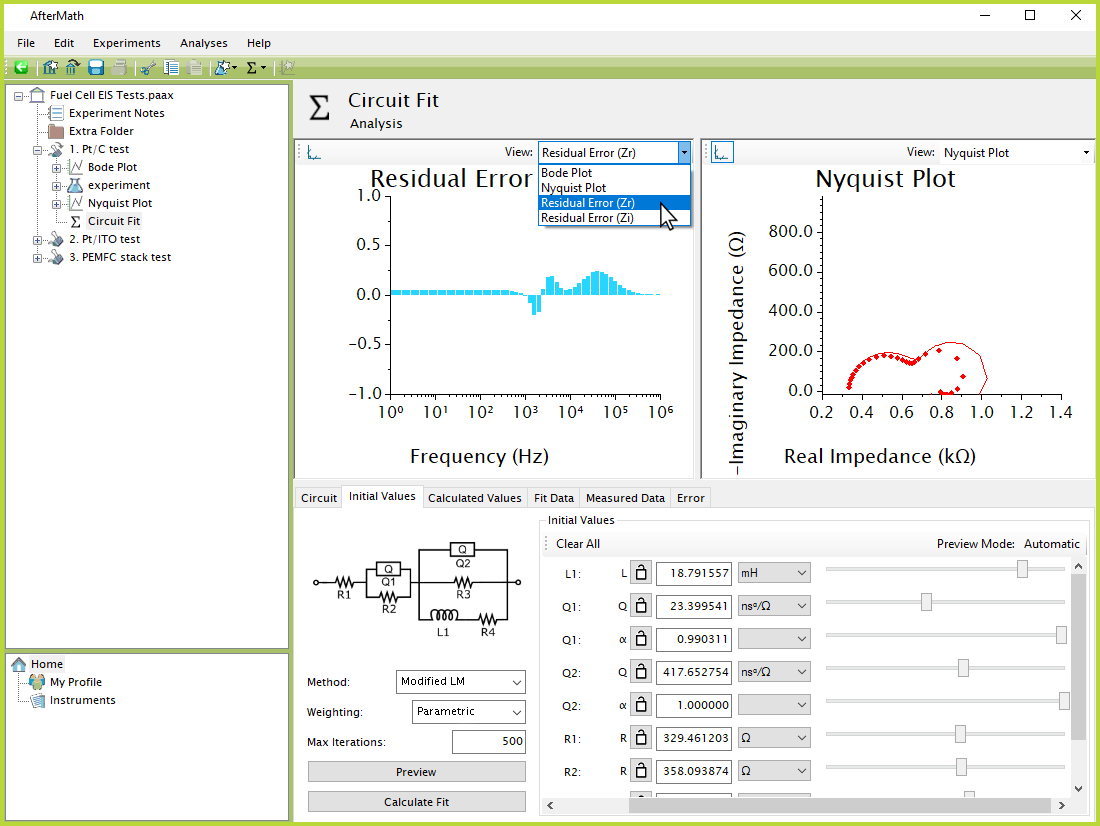 Within the circuit fit node are numerous options for adjusting and/or improving the fit, in addition to different statistical analyses that can be evaluated or exported to another program if desired.  These options and practices are beyond the scope of this article, and information may be found in separate posts the Pine Research Knowledgebase.
The second analysis type is called "Transmission Line", and it behaves similarly to the circuit fit analysis.  After the transmission line node has been added to EIS data, the framework of a transmission line circuit appears where each element can be changed as needed using the drop-down boxes to the right of the screen under "Configuration" (see Figure 8).  There are a few different preset options to choose from, or the user may specify a custom set of circuit elements to build any desired transmission line.  Once the circuit has been finalized, the transmission line can be mathematically fitted to the experimental data similarly to a circuit fit.  More information on transmission line can be found elsewhere on this Knowledgebase. 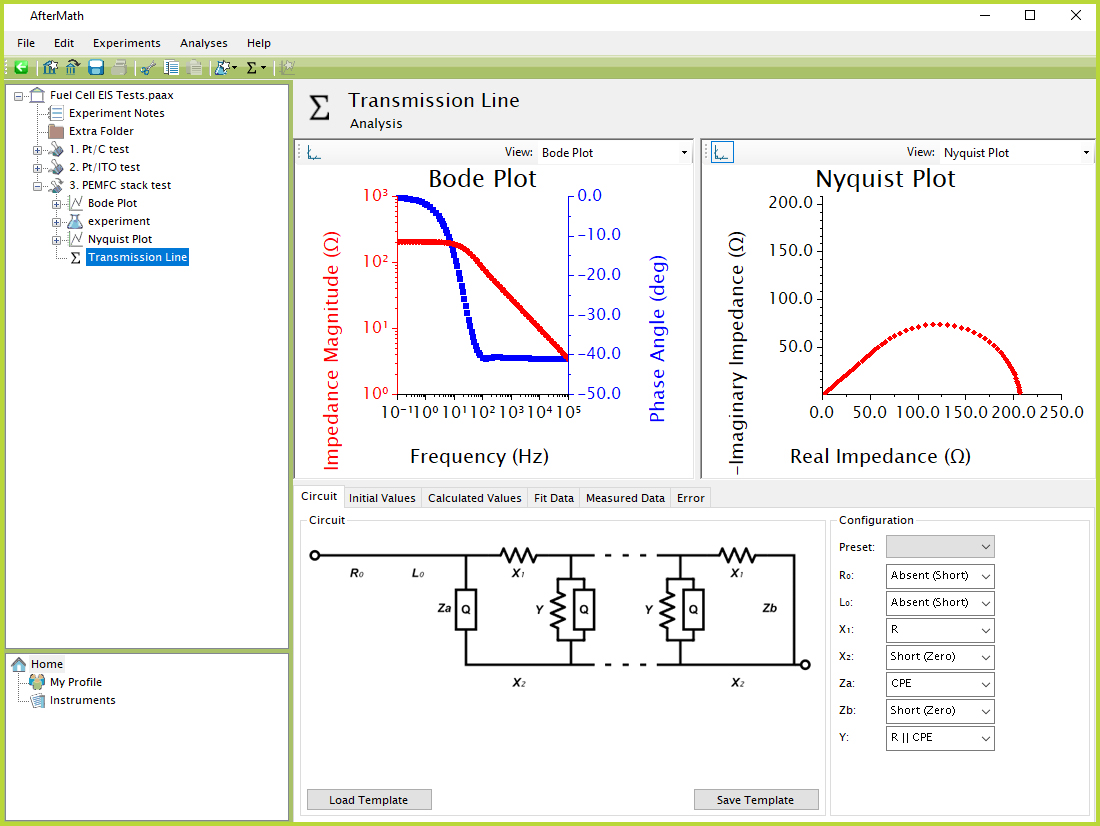 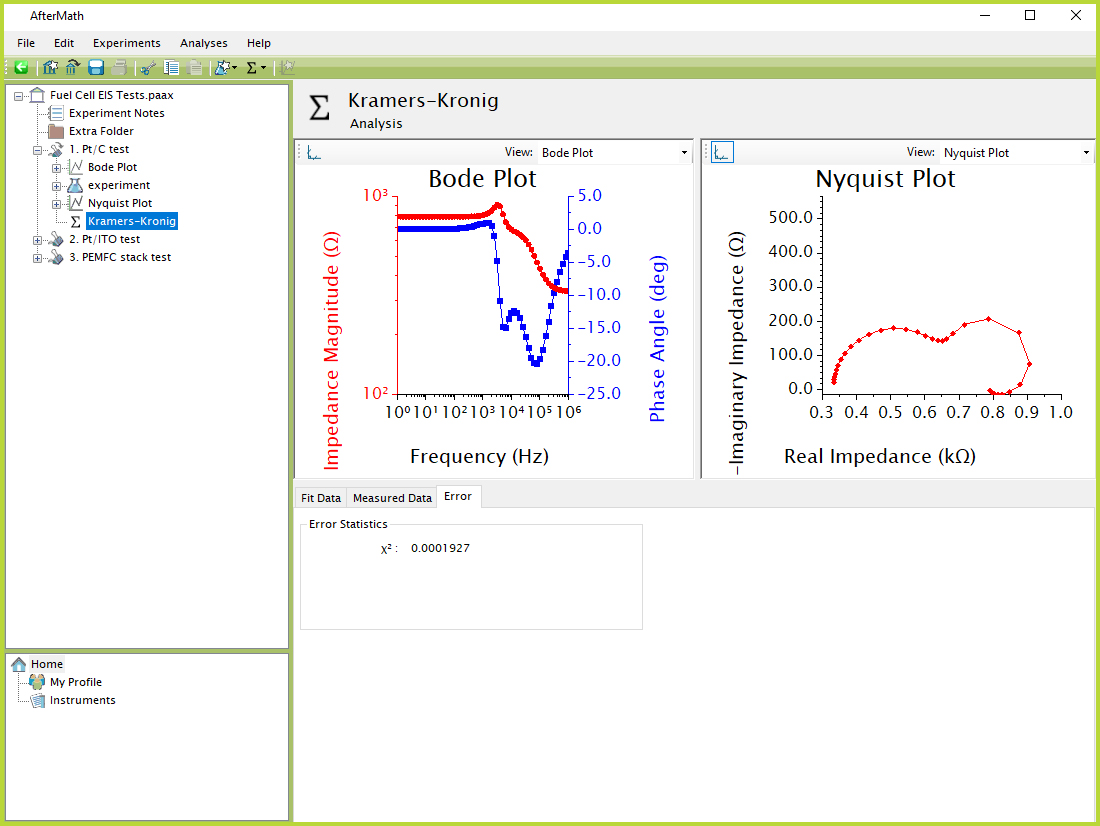 The final analysis option is a simulation.  A simulation is not restricted to EIS data and can be added underneath almost any node in an archive (see Figure 10).  Similarly to a circuit fit, the first window that appears after adding a circuit simulation is the circuit library where a circuit model can be selected.  Once the desired circuit model is chosen, the parameters can be adjusted as needed to observe their graphical effect on the Bode and Nyquist plots (see Figure 11).  In a simulation, since there are no experimental data, there are no mathematical fitting operations that can be performed or statistical analyses to evaluate.  However, the simulated circuit data can be easily copied and exported to another program if needed. 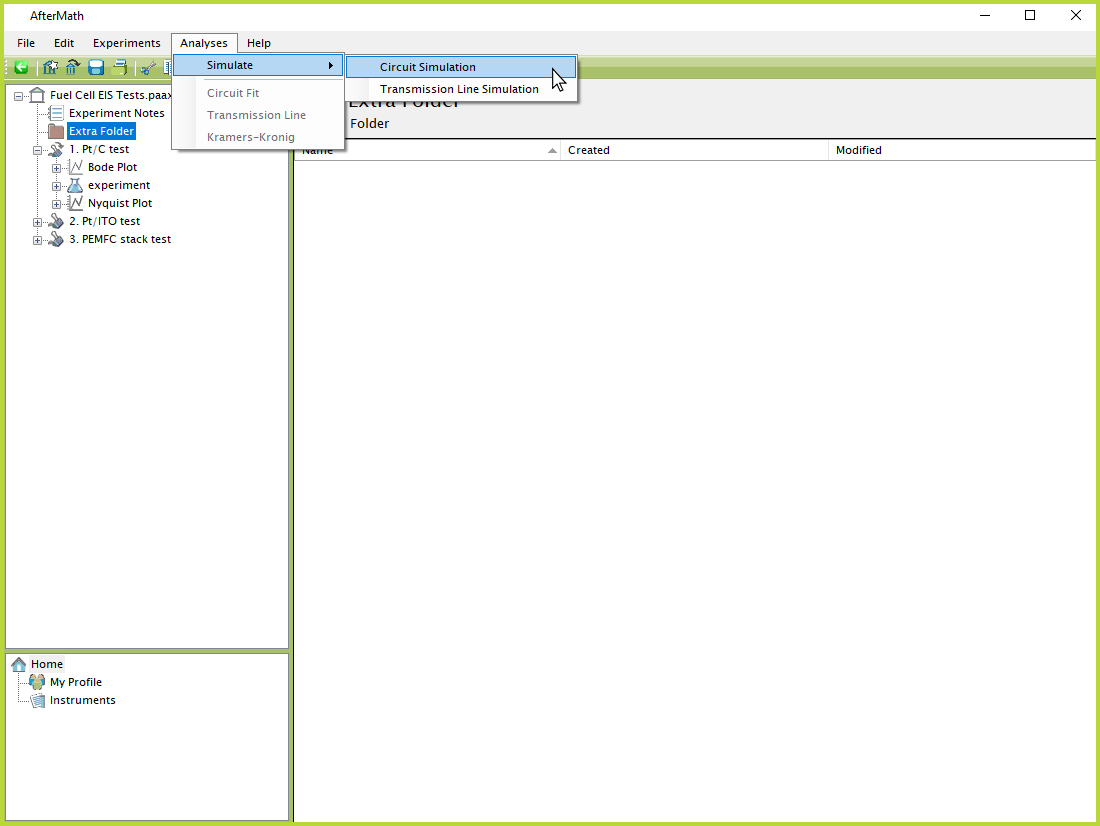 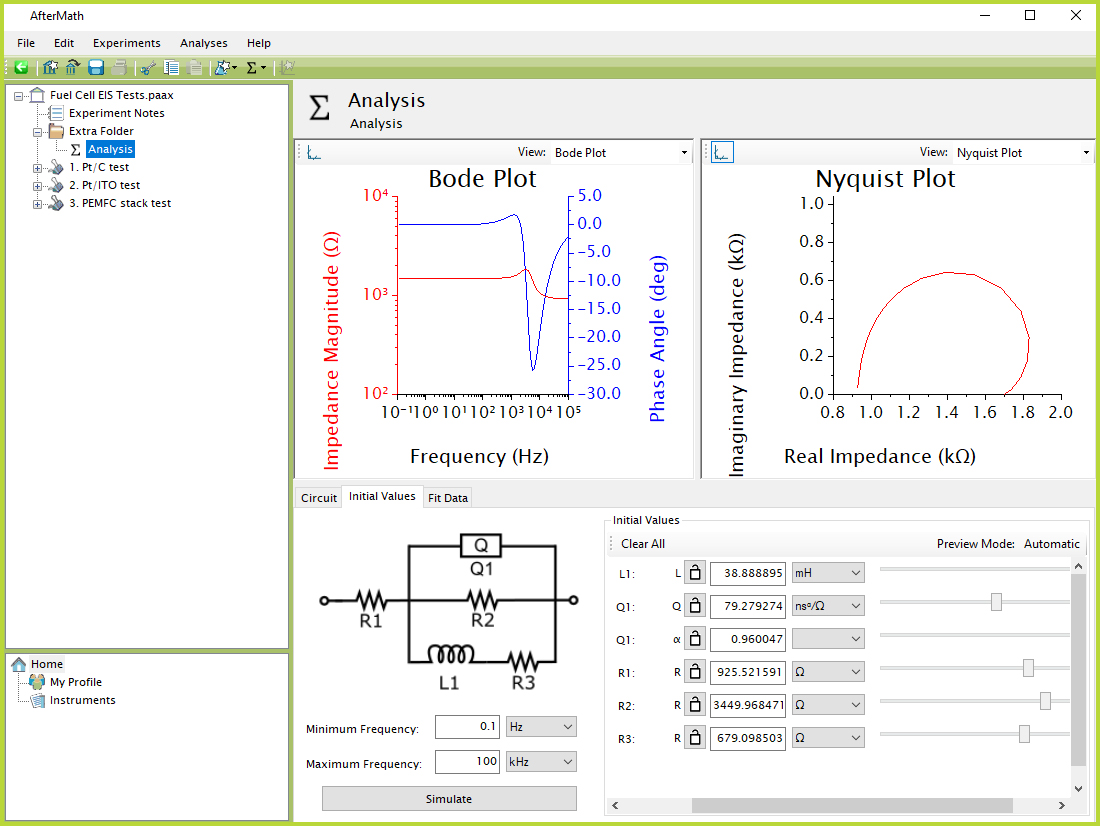