Rotating Disk Electrolysis (BE-RDE) is both a galvanostatic and potentiostatic method, depending on user choice of electrode mode.  The background and theory of this method is closely related to its stationary version, Bulk Electrolysis (BE).  As with most bulk electrolysis experiments, solution is stirred.  With BE-RDE, the rotating electrode is used both to stir the electrode and to convey the analyte towards the electrode surface.

Many techniques used in electroanalytical chemistry affect change within a chemical system with small surface area to volume ratios.  For example, it is common to conduct stationary cyclic voltammetry (CV) at a 3 mm OD working electrode in 100 mL of solution containing  1 mM electroactive species.  In such a system, CV can be performed for long periods of time without appreciably changing the bulk concentration of analyte (oxidized and or reduced species), assuming a nominal 1 mA/cm2 current density.  In this case, <1 C passes and the bulk concentration of electroactive species does not appreciably change (~250 mC).
In contrast to this typical setup, Rotating Disk Electrolysis (BE-RDE) is conducted with convective stirring for enhanced mass transport.  The anticipated outcome is to significantly change bulk solution properties during the course of the electrolysis.  Addition of a rotating electrode stirs solution in a controlled manner, thereby improving mass transport of analyte to the rotating electrode surface.   In this case, all electroactive species in the cell are converted to their reduced form in a short period of time.  Often, this is the goal to exhaustively convert analyte from reduced to oxidized form, and vice-versa.
BE-RDE can be operated with four different electrode modes:
Controlled potential rotating disk bulk electrolysis is by far the most commonly used mode; however, some might use controlled current for select applications.  While a potentiostat, with reference feedback, is required for controlled potential bulk electrolysis, simpler instrumentation consisting of only a high voltage power supply (or batteries) and a large resistor can be used.  The focus of this article will primarily focus on BE-RDE in POT mode (constant potential rotating disk bulk electrolysis).
Back To Top

Numerous texts thoroughly explain electrochemical theory and should be consulted for a complete understanding of this method.

in a one electron reaction.  A solution of

moles of electrons to completely reduce

.  Upon applying a sufficient reducing potential, a large amount of

and subsequently swept away from the rotating electrode.  As more

the current falls off exponentially until it reaches background level.  It is at this point, the electrolysis can be stopped.  The charge

passed during the experiment can be obtained by integrating the current with respect to time.

By the following equation, charge can be converted to the number of moles of

electrolyzed during the experiment

is the number of electrons transferred during the reaction.
Additional and more complete background of this theory is provided in the Theory section of the Knowledgebase. 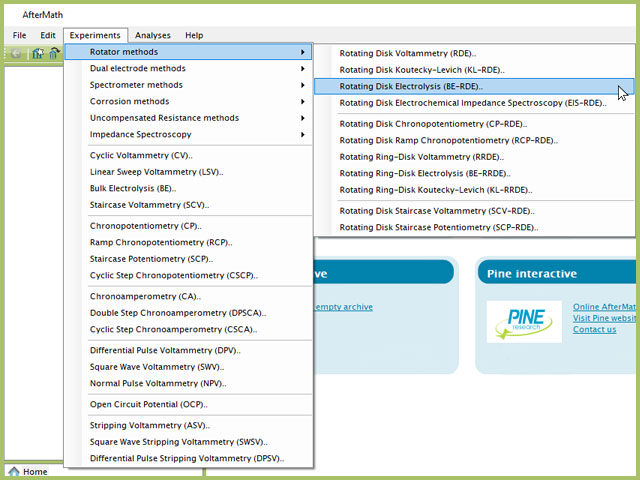 Doing so creates an entry within the archive, called BE-RDE Parameters. In the right pane of the AfterMath application, several tabs will be shown (see Figure 2). 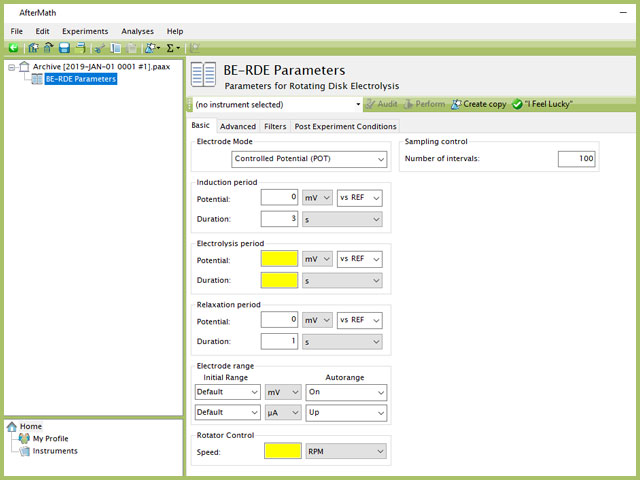 Continue reading for detailed information about the fields on each unique tab.
Back To Top

The basic tab contains fields for the fundamental parameters necessary to perform a BE-RDE experiment.  AfterMath shades fields with yellow when a required entry is blank and shades fields pink when the entry is invalid (see Figure 3). 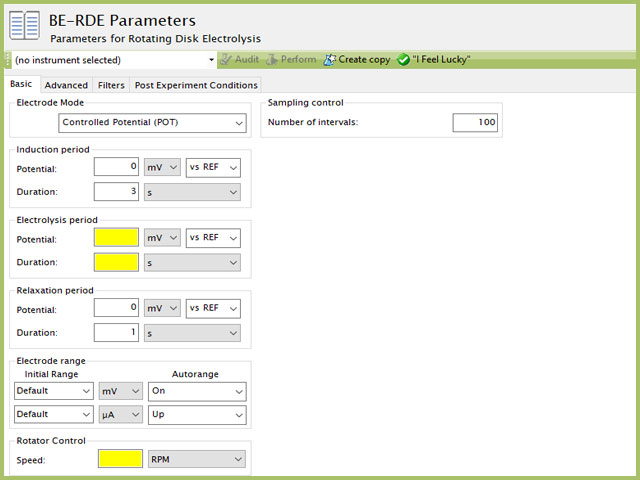 The first selection with BE-RDE is the Electrode mode (see Figure 3).  Controlled potential BE-RDE is the most commonly used mode.  The modes available are summarized as follows:
As with most Aftermath methods, the experiment sequence is
Induction Period → Electrolysis Period → Relaxation Period → Post-Experiment Idle Conditions
Unlike most experiments, the Induction and Relaxation Periods are on the Basic Tab.  The parameters for a BE-RDE experiment are fairly simple compared to other methods in AfterMath.  A plot of the typical experiment sequence, containing labels of the fields on the Basic tab, helps to illustrate the sequence of events in a BE-RDE experiment (see Figure 4).  Again, given that different electrode modes are possible, the illustrations provided here assume Controlled Potential (POT) mode; however, other modes such as Controlled Current (GAL) are analogous to these figures, with different units on the y-axis. 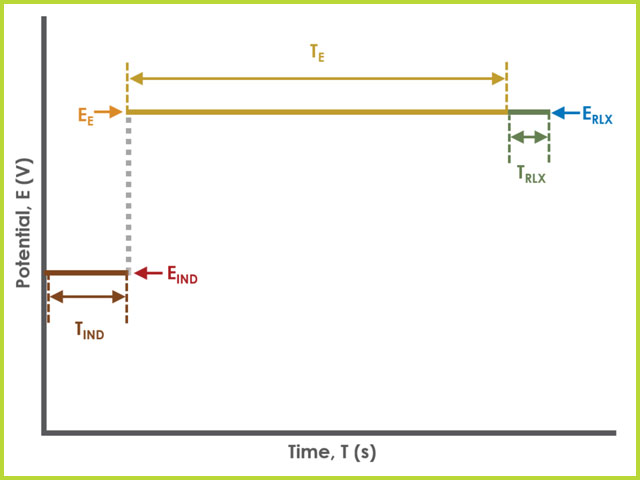 Field labels in AfterMath will eventually include symbols, such as those used in the waveform plot below.  Consult the cross-reference table (see Table 1) to match field names with symbols.

Users should enter a number of intervals that their analysis requires.  Commonly, BE experiments are sampled at a lower rate (1 sample/s).  Not all sampling rates are allowed due to differences in hardware (WaveNow series vs. WaveDriver series, for example).

The experiment concludes with a relaxation period.

Understanding Post Experiment Conditions Tab are applied to the cell, and the instrument returns to the idle state.  The default plot generated from the data is measured potential vs. time, called a chronoamperogram.
Since this is a rotating experiment, the basic tab includes a field to specify rotation rate.  If your potentiostat is connected to the rotator rate control unit (for example, Pine Research potentiostats have a dedicated rotator control port on the potentiostat, that with a special cable, connects to the rotator to control its rotation rate during experiments), then the rotator will rotate the electrode throughout the entire experiment.  More on automated rotator settings within the knowledgebase.

Automated Control of Electrode Rotators
The Electrode Range on the Basic tab is used to specify the expected range of current and/or potential.  If the choice of electrode range is too small on a potentiostatic experiment, measured current could be off-scale, appearing as a truncated flat line where the signal exceeded the selected measurement range.   Alternatively, if the electrode range is too large for the incoming signal, measured current may have a noisy, choppy, or quantized appearance due to lower than desirable resolution based on range choice.  More details on avoiding "the ugly ducking" within the knowledgebase. 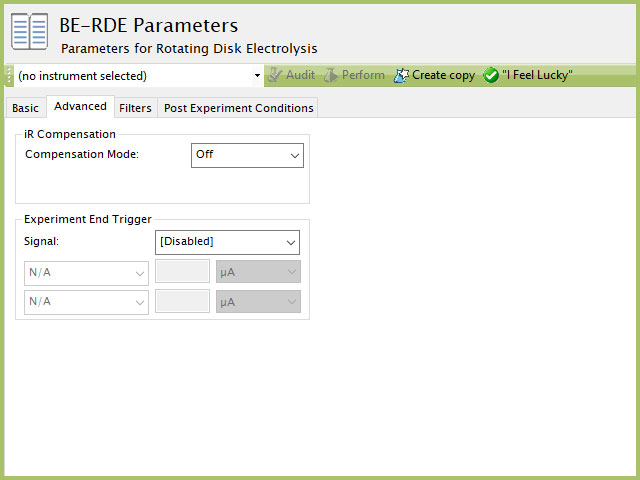 iR Compensation This mode is used to correct for uncompensated resistance in the electrochemical cell.
In a BE-RDE experiment, the research might want to have AfterMath monitor the response and then stop the experiment a specific current, potential, and/or charge.  This value is called a trigger and is set in the Experiment End Trigger group on the Advanced tab (see Figure 5).  For CP, the signals for the trigger can be potential or current.  Details on the End Trigger settings are found elsewhere in the knowledgebase.

Regional Variations of Spontaneous, Transient Adenosine Release in Brain Slices
Back To Top

Nicotinic acetylcholine receptor (nAChR) mediated dopamine release in larval Drosophila melanogaster These fields are often duplicated, and linked to, the same fields on the Basic tab.  Additionally, a field for Autorange control for both potential and current appear on this tab.   More information on autorange is available elsewhere on the knowledgebase.

Drosophila as a Model System for Neurotransmitter Measurements
By default, the potentiostat disconnects from the electrochemical cell at the end of an experiment.  There are other options available for what these post-experiment conditions can be and are controlled by setting options on the Post Experiment Conditions tab.  Complete details on the fields and settings on this Post Experiment Conditions tab are provided elsewhere on the knowledgebase.

In the typical result discussed here, the starting material K4Fe(CN)6 is partially oxidized to K3Fe(CN)6 by applying a sufficiently positive potential (+500 mV vs. REF) to drive the oxidation.   At the completion of the experiment, which has not been allowed sufficient time to reach exhaustive (complete) electrolysis, a mixture of  K4Fe(CN)6 and K3Fe(CN)6 will remain in solution.
Prior to performing the electrolysis, the observed value of the open circuit potential (~50 mV vs. REF, not shown) was consistent with a solution containing primarily the reduced form of the analyte K4Fe(CN)6.  Additionally, a preliminary cyclic voltammogram confirms that a significant oxidation current is observed if the working electrode potential is at or above +500 mV vs. REF (see Figure 6).  For these data, the following experimental conditions applied: 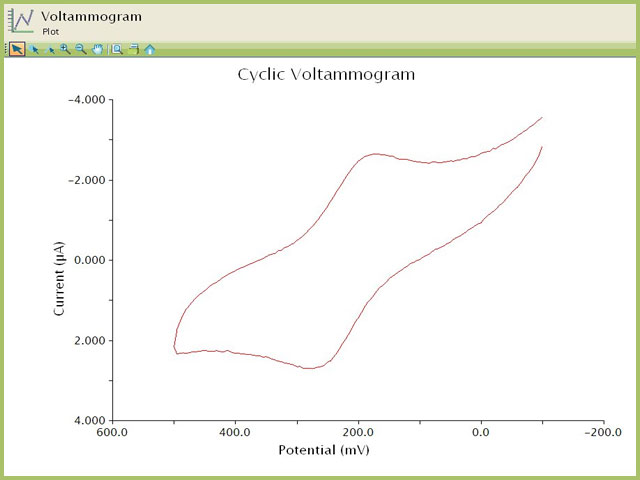 The principal result from a BE-RDE experiment is a plot of current versus time (when potentiostatic electrode mode selected on the Basic tab). A BE-RDE experiment was performed with the following experimental conditions (see Figure 7): 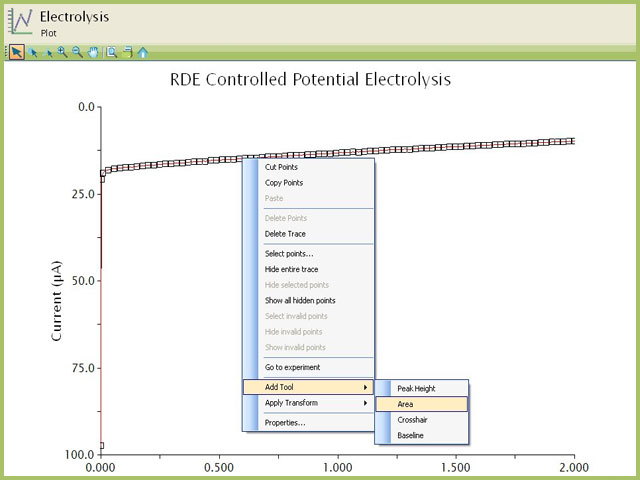 Figure 7. Use of Area Tool on Potassium Ferricyanide BE-RDE Chronoamperogram

Since this was a potentiostatic experiment, the resultant plot yields current (y-axis) as a function of time (x-axis).  Integrating the current with respect to time will yield the total charge (Q) passed during the experiment.   The Area tool in AfterMath easily calculates this area (performs integration and provides the total amount as charge).  Consult the knowledgebase for details on using the Area tool in AfterMath. 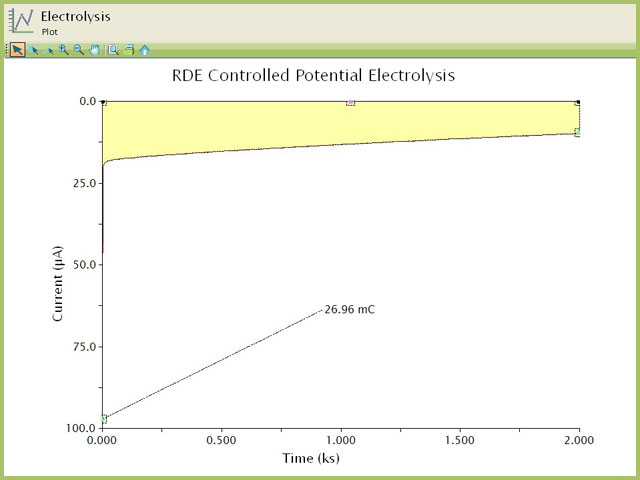 Figure 8. Integration (Calculation of Area) for the BE-RDE Chronoamperogram of Ferricyanide

Finally, the open circuit potential measured after the electrolysis period is 0.275 V vs. REF.  The ratio of oxidized to reduced species can then be calculated (using the Nernst Equation

is the open circuit potential,

is the absolute temperature,

is the number of electrons transferred in the half-reaction, and

Wikipedia - Faraday Constant  The ratio of oxidized to reduced species in this example is 5.77:1; therefore, the solution following BE-RDE contains approximately 85% K3Fe(CN)6 and 15% K4Fe(CN)6.
For an additional electrolysis example, consult the basic discussion of bulk electrolysis (BE).

Bulk Electrolysis (BE)
Back To Top

In this example from Puglisi and Bard,

Chardon-Noblat, S.;&nbspRenfrew, A.;&nbspLafolet, F.;&nbspDeronzier, A.;&nbspJakonen, M.;&nbspLaurila, E.;&nbspHaukka, M.  An easy electrochemical and chemical synthesis of [Ru(bpy)(CH3CN)2Cl2]: a synthon for heteroleptic tris(diimine) Ru(II) complexes.  Dalton Trans., 2008, 5891-5896. synthesized a the macromolecule [Ru(bpy)(MeCN)2Cl2] in a one-electron reduction of a Ru(III) precursor. Previously, this molecule was only obtained in mixtures with the corresponding tris(acetonitrile) derivative, [Ru(bpy)(MeCN)3]Cl.  The authors also chemically synthesize the [Ru(bpy)(MeCN)2Cl2]  via a one-electron reducing reagent, sodium diethyldithiocarbamate.  Correlating the amount of charge passed during electrolysis with the amount of liberated chloride ion confirmed that the electrochemical synthesis of the desired complex proceeded with no side reactions.  This application highlights the usefulness of bulk electrolysis for synthesis.
Back To Top