The third installment in our “waves”  series is here!

We hope that you are caught up with our newsfeed!  If not, we recommend starting with the first and second articles in this series.  Our first article focused on the WaveNow and the second article provides a history of our older CBP bipotentiostat, to a more modern WaveDriver bipotentiostat.  In this final installment, we share another history with you.  Here we will focus on electrode rotators and their history and evolution at Pine Research.

Whether you know our company as “Pine,” “Pine Instrument Company,” or “Pine Research Instrumentation,” you likely associate us with electrode rotators.  Applications like rotating disk, rotating ring-disk, and rotating cylinder electrochemistry have become fundamental in the field of electrochemistry and we have been involved in these areas since their first entrance into the market.  Believe it or not, Pine started selling the first commercially-available electrode rotator 50 years ago.  The story behind rotating disk and rotating ring-disk electrochemistry is very interesting.  The general manager of Pine Research, Frank Dalton, spent the early months of 2016 recording and documenting the rich history of the technique.  His research included first-hand accounts of the theory, science, and practical institution of the commercial electrode rotator.  He wrote a very engaging article for the ECS Interface publication.  We encourage you to start with this article to fully appreciate the longevity, ingenuity, and notable figures behind this technique (ECS Classics: Historical Origins of the Rotating Ring-Disk Electrode.  doi: 10.1149/2.F03163if Electrochem. Soc. Interface Fall 2016, 25(3), 50-59). 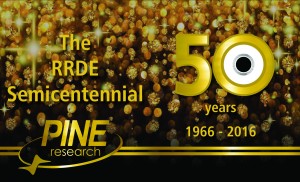 Pine Research celebrated the 50th anniversary of the seminal publications on the theory of rotating ring-disk at the Fall 2016 ECS Meeting in San Diego.  At this meeting, Pine Research held a reception in honor of the technique and those who developed it.  From the early beginnings in the 1950’s to present day, folks like Levich, Albery, and Bruckenstein worked tirelessly to bring rotating ring-disk electrochemistry to the mature level scientists still use today.  In 1966, a series of seminal papers on rotating ring-disk were published by Bruckenstein, Albery, and other students in the lab at that time.  While RRDE was known prior to these publications, the complicated differential equations had never been adequately solved and published.  The Interface article provides complete details on this aspect of the history.  The history of the commercial electrode rotator is also an interesting story. 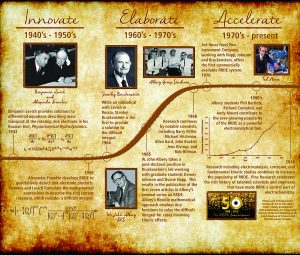 The RRDE Semicentennial – a brief history of the RRDE, presented at the San Diego ECS Meeting.

Ted Hines started Pine Instrument Company in Grove City, PA in the 1960’s.  Through a University of Minnesota connection, Ted was asked if his company could make electrode rotators.  Indeed, in 1968, the first commercial electrode rotator and electrodes were brought into the analytical instrumentation market.  The first rotator did not even really have a name other than “electrode rotator” and was known by its part number, the AFPIR (Pine Instrument Rotator).  This system was belt driven, where the rotation rate selection was made by adjusting the position of mylar bands on spindles on top of the motor.  Presently, we would view such a system as archaic, but for its time, it was the only way to accomplish rotating ring-disk electrochemistry unless your lab was able to build your own rotator (as Bruckenstein’s and Albery’s lab had done).  The rotator has come a long way, adding analog control and modulated speed over time.

Timeline of the Pine Research rotators, from early conception at the University of Minnesota, to the CPR Rotator (and beyond).

As shown, the initial rotator went through several revisions.  Some of the changes included adding easier control (analog circuitry) of rotation rate (the ASR Rotator), reducing the motor size and adding simple push button (the MSRX Rotator) and smooth dial knob (the MSR Rotator) to the control units, and integrating control unit with motor and shaft (the CPR rotator).  Simultaneously, Pine Instrument Company formed another company who would be dedicated to electrochemical instrumentation.  This company, Pine Research Instrumentation, is still part of the original Pine Instrument Company but has grown significantly over the past 15 years.  Part of the growth is fueled by innovative design changes to longstanding best-selling products, like the electrode rotator.  In 2017, Pine Research unveiled the latest in their long line of electrode rotators at the ECS Meeting in New Orleans. 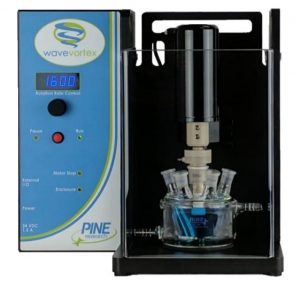 Released in 2017, the WaveVortex 10 Electrode Rotator is the latest research-grade rotator on the market.

Unlike previous models, Pine Research decided to name the rotator consistent with their trend – use of “Wave” in the product name.  The WaveVortex 10 is the latest evolution research-grade rotator on the market.  Like its peers in the Pine Research instrumentation lineup, the WaveVortex 10 name shares the same naming convention, joining “Wave” with “Vortex,” which connotates a vision of stirring and rotating.  The WaveVortex 10 combines the best of the MSR and CPR rotators while reducing its footprint and driving down the cost.  Without sacrificing quality, Pine Research developed the latest rotator with integrated control unit, smaller footprint, permanently mounted shaft, and electrode compatibility – so that our large body of customers around the world can continue to use tips they have previously purchased.  The system has had a great reception.  We anticipate the WaveVortex 10 will add to our growing presence in the scientific literature, where we are the most cited electrode rotator in the world (and have been for over 40 years).

As this “Wave” series has shown, Pine Research has a long and rich history, where we have always been interested in offering products with the potential to shape the future of electrochemical instrumentation.  Pine Research is very excited about the upcoming 233rd ECS Meeting in Seattle.  For the last several months, we have been encouraging you to “Catch the Wave.” Hopefully, the articles in this series have been interesting and informative.  Perhaps they have answered questions like “Why Waves?” or “how long has Pine been…?”

We look forward to visiting with you at the upcoming ECS Meeting in Seattle, where we will have a whole new kind of wave to show you!  Be sure to visit our Beach Party at the ECS Exhibition!  Monday night, during posters, from 6 – 8 PM.  Free swag and exciting new products. You do not want to miss it! 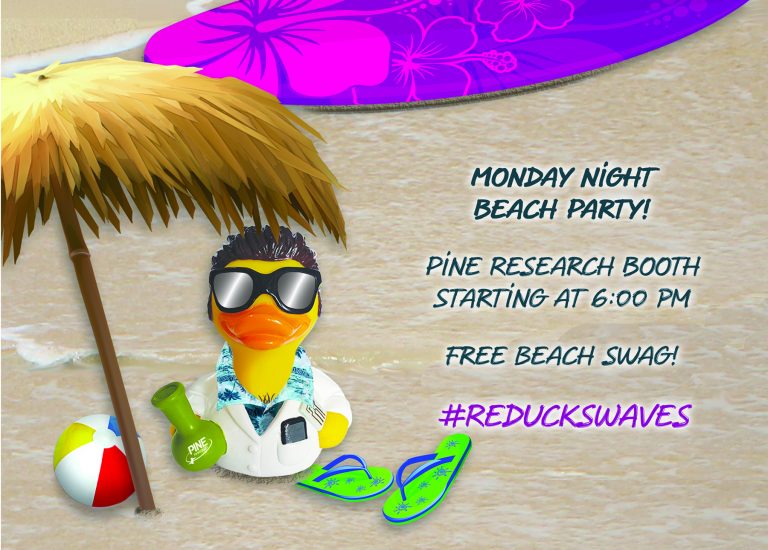 See you at ECS Seattle Beach Party! 14 May starting at 6 PM!