The second installment in our “waves”  series is here!

We hope that you are caught up with our newsfeed!  If not, we recommend starting with the first article in this series, which describes our use of “Wave” in product names.  Our first article focused on the WaveNow.  In this article we take a look at upgrading our older CBP bipotentiostat, to a more modern WaveDriver bipotentiostat.  Readers will get a sense of the history of our bipotentiostat, as well as learn a thing or two about how modern potentiostats work and their relationship to the computer used to operate them. 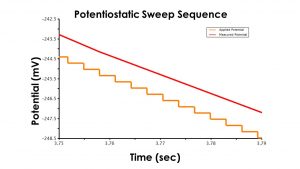 A linear sweep is actually made up of many small potential steps when using a computer to control the potentiostat.

The CBP also featured a fully analog and on-board waveform generator which was front panel control.  With front panel control, you could control your electrochemical experiment with knobs, dials, and buttons!  Such “technology” is practically extinct, favoring the advanced control offered by software.  While the CBP was showing its age regarding design and capabilities, the talented software team gave the product new life by incorporating the CBP into the instruments controlled by AfterMath software.  The trade-off in controlling the potentiostat with software was the loss of true analog waveforms.  Under AfterMath, waveform generation duties transferred to the acquisition board, which uses digital sweep approximation.  Computers generate a digital signal which gets carried over to the potentiostat.  The potentiostat then turns that digital signal into an analog signal (voltage and current).  The measured signal from the potentiostat is an analog signal (the current from a cyclic voltammogram); however, we must read the data on a computer.  The potentiostat then transfers the analog signal back to a digital signal that the computer can recognize.  Digital to analog and analog to digital converters are circuits used in a potentiostat to do this process.  While we are taught that the potential is swept linearly with time when we perform techniques like cyclic voltammetry, the nature of digital signals makes a truly linear process impossible.  If you look carefully at the applied potential waveform in a cyclic voltammogram, you can many small potential steps. 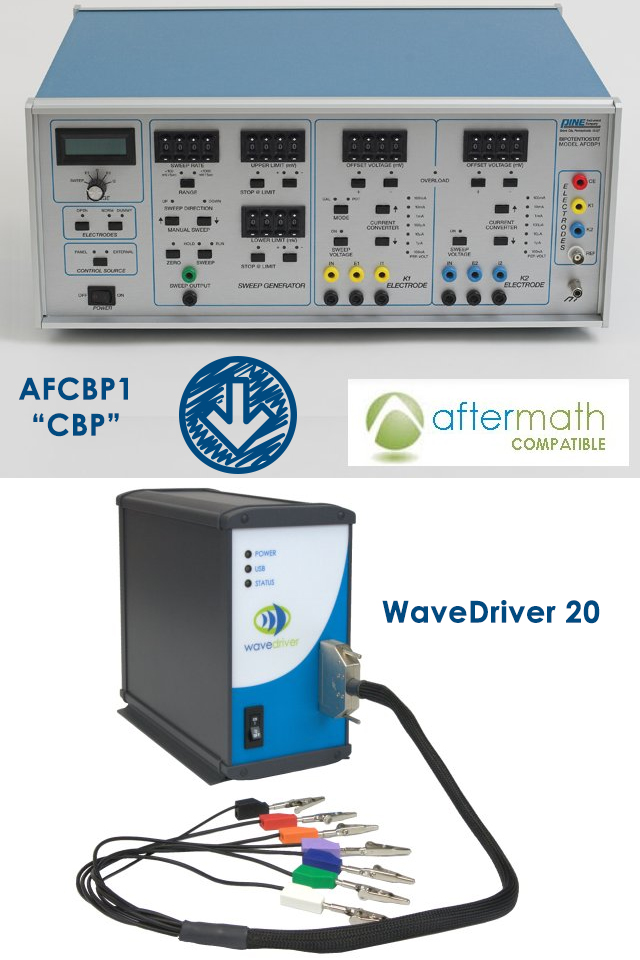 As the engineering team was working on the new bipotentiostat, the decision was made to keep the theme established with the WaveNow.  A potentiostat aids electrochemical researchers in measuring current and voltage, but also in driving these signals in different ways.  It did not take long to realize the new bipotentiostat would be named the WaveDriver, a more powerful benchtop potentiostat with upgraded filtering, greater applied/measured voltage ranges, and higher current capabilities than their smaller WaveNow series peers.  It was also an integrated bipotentiostat.

The final product is a true “DC workhorse.”  Hundreds of WaveDriver 10s and 20s have been shipped all over the world.  Refreshing, cool, and powerful like waves, the WaveDriver 10/20 is another success story, helping researchers across the world perform electrochemistry experiments.  The talented folks at Pine Research did not stop there, and have been busier than ever before.  A feature lacking in the WaveDriver 20 is the ability to conduct AC electrochemical experiments, such as electrochemical impedance spectroscopy (EIS).  The internal circuits of the WaveDriver 20 does not have a frequency response analyzer (FRA), a required component for applying and measuring sinusoidal sine wave, alternating current signals.  Techniques such as EIS are becoming expected across the energy spectrum (batteries, capacitors, and fuel cells) and with biosensor research, so the WaveDriver 20 will need its own design evolution to accomplish this…The tide is changing, keep an eye out for the next installment of our catch-the-wave series!